Bizet’s Carmen: the untamable gypsy Carmen is loved to distraction by the soldier Don Jose. After he deserts his regiment and hometown sweetheart Micaela for her, she dumps him in favor of the glamorous bullfighter Escamillo. The maddened Don Jose stabs his former lover. It’s an opera of passion, romance, and exoticism. San Francisco Opera’s production evokes none of those concepts. The long-awaited United States debut of director Calixto Bieito, this modern Carmen is grit, violence, and sex. It works, though the effective staging is undermined by problems with acoustics and casting. 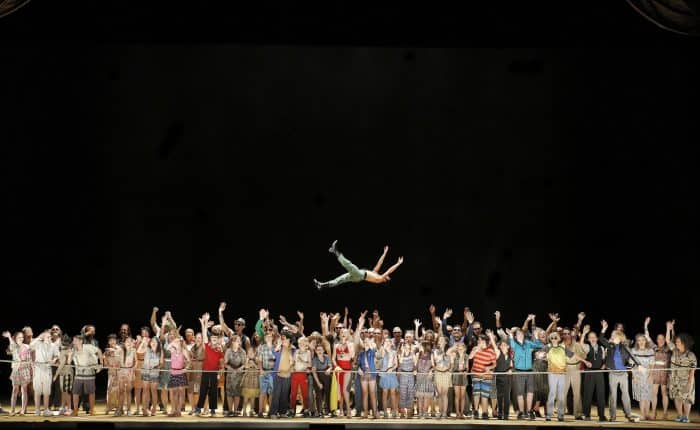 Dramatically, the production is helped by its quick pace. Generous musical cuts and the use of dialogue rather than recitative keep the story moving. Although the staging is tame by Bieito standards, there’s still plenty to surprise audiences: sex (on the hood of a moving car!), nudity (a male dancer performing a pre-bullfight ritual), and violence (the brutal murder of an officer and desecration of his corpse). The language of the supertitles is stark, rendering “coquettes” as “insolent bitches.” Not all of the shocks are dark—a crashing scene change in the second half impresses for its sheer scale—but don’t expect to smile (unless it’s at the many buff half-naked men on the stage).

None of this is gratuitous; Bieito intends to strip away the story’s allure, and he succeeds. Don Jose threatens violence against Carmen in the second act and nearly strangles her in the third. Their abusive relationship is clearly doomed from the start. The parade of toreadors is left to our imagination: we see only the crowds’ reactions rather than the bullfighters in their exotic panoply. The gypsy women sport no flamenco dresses, and the only dancing is by an exploited child. Even the usually innocent, appealing Micaela is conniving and catty. We have no one to root for and nothing to dazzle us.

This is appropriate (more appropriate than romanticizing a relationship that ends in murder), but it removes the story’s emotional core, which lies in Don Jose’s gradual corruption and despair. The music might fill that void, but it doesn’t reach the audience in full force. Bieito’s minimal sets (five cars and a giant wooden bull) leave the stage entirely open. With much of the action taking place behind the proscenium, the sound gets swallowed. The singers are still audible, but their voices lack immediacy.

As Carmen, Irene Roberts deftly handles slippery lines with an earthy mezzo voice and great portamento. She looks and moves the part as well, though she lacks the indescribable charisma that makes Carmen the object of so much longing. She is well matched by tenor Brian Jagde as Don Jose. His singing is consistent and apparently effortless throughout his range; he navigates the difficult aria “La fleur que tu m’avais jetée” with power and expression.

In smaller roles, the singers are less solid. Zachary Nelson’s Escamillo is a bad casting mistake—he barely croaks his way through the role. Ellie Dehn initially fails to impress as Micaela, struggling with aspirates and an underpowered lower range. However, after the first few lines of “Je dis que rien ne m’épouvante,” her voice opens up. She soars in the aria’s highest sections and ends on a gorgeous pianissimo. Amina Edris is mis-cast as Frasquita and sounds constantly shrill. Renee Rapier fares better as her frenemy Mercedes, showing off a rich lower range.

Both the children’s and adult’s choruses create full textures of sound and act with commitment. Carlo Montanaro leads the San Francisco Opera Orchestra in a safe reading of the score: classic but hardly revelatory. I was seated right in front of the cymbals, which overwhelmed much of the overture, but in less percussion-heavy sections of the opera, the orchestra was well balanced. The banda also deserves acclaim for excellent castanet playing and bugle calls in act II.

You won’t leave this Carmen swept away by the spectacle or gripped by the story. Unfortunately, you won’t even leave thrilled by the music. But you will leave with more to think and talk about than any version full of hair combs and fans and shiny matador jackets would give you.