Watch out Kayne. Watch out professional athletes. And watch out… well, all of us.

GOD is in town, and he wants to make one thing perfectly clear: if you think your talent was God-given, don’t be surprised if it is soon “God-taken.”

Beginning March 29 at the SHN Golden Gate Theatre, God has decided to embody Emmy-winning actor-comedian Sean Hayes (Will & Grace) — but just for a weeks because wouldn’t you know, as he tells me, his schedule is a “Holy mess.”

In this special Stark Insider interview, I head to 1182 Market Street in San Francisco, where I discover a somewhat makeshift heaven, a man who really likes his cranberry juice (as long as it’s served with LOTS of something else…), and someone who guarantees us that he absolutely does not affect the outcome of sporting events. You heard it here first. 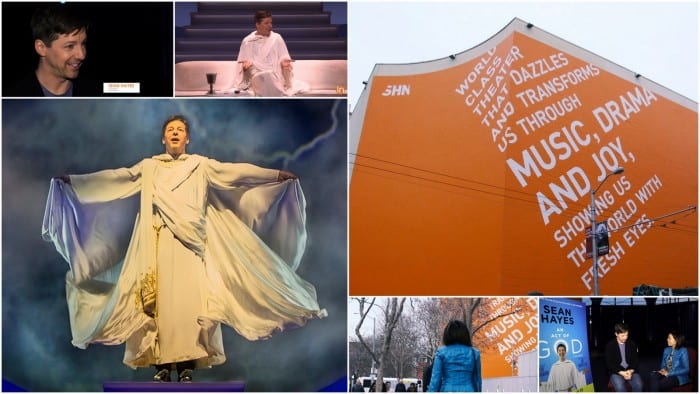 The show An Act of God is written by none other than the almighty creator of everything, God. Well, for proper attribution, God in this case humbly agreed to accept the credit of playwright. David Javerbaum, the ridiculously funny man behind the now retired @ActofGod Twitter account, is merely, I suppose, the fortuitous “adaptor.”

So, let’s get to it. I admit, I’m slightly nervous. God is, no question, the most important person we’ve yet to meet on Stark Insider. What on earth to wear… let alone say…