4 out of 5 stars - 'Smashing'
American Conservatory of Theater (A.C.T.)
Review by Ilana Walder-Biesanz

A Christmas Carol is the story of a withered soul reawakened through imagination. The miserly Scrooge must discover what matters in life. Even if none of us watching this show at the American Conservatory Theater are quite as far gone as Scrooge, we could all use a reminder of the power of empathy. This show offers that, and it’s tons of fun, too.

This dramatization of Dickens is a lavish spectacle. Each ghost enters in a different way. Jacob Marley (Scrooge’s former business partner, played by Ken Ruta) appears, laden with chains, through a trap door in the Scrooge’s bed. The Ghost of Christmas Past (Lauren Hart) floats in on a swing, in sparkling fairy-white. The Ghost of Christmas Present (Cindy Goldfield) simply walks onto a balcony, in resplendent green velvet, giggling uncontrollably. The dismal visions of the future shown by the third ghost take the form of a stage-sized black wraith that opens and closes its arms to reveal what might happen on future Christmases.

Other aspects of the production are just as dramatic, with floating houses as a backdrop, a ghost flung through a shrinking hole in the curtains, and plenty of sound effects—not to mention musical numbers by Karl Lundeberg and dances by Val Caniparoli. A huge and talented cast supports a production at this scale. The youngest actors make a particular impression, singing sweetly and dancing with energy and precision. Special mentions are due to the French plums, Turkish figs, and Spanish onions, and to Mattea Fountain for her heartwarming performance as Tiny Tim. Among the adults, Nicholas Pelczar’s Bob Cratchit stands out for earnestness and cheerfulness, and Sharon Lockwood’s always-echoing, self-deprecating Mrs. Dilber earns lots of laughs. 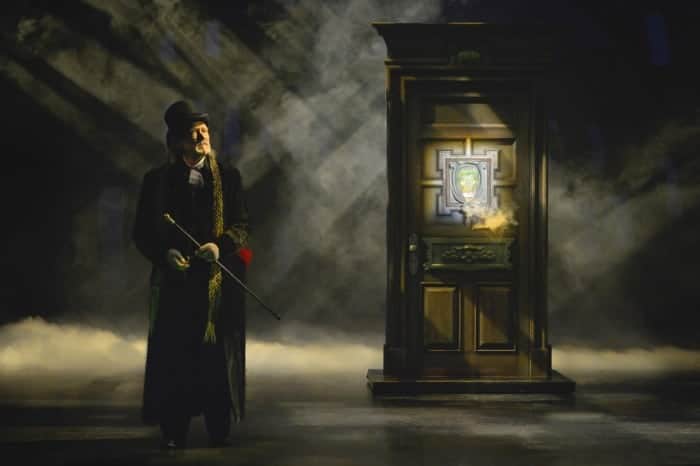 Of course, Scrooge is the heart of any Christmas Carol, and James Carpenter does not disappoint. He’s both pitiable and funny as a misanthropic miser, punctuating his lines with scoffs and grunts as well as the obligatory, “Bah, Humbug!” But he’s even better as he enthusiastically enters into his visions, conducting secret handshakes in tandem with his younger self and shouting giddily for more games. He discovers not only the spirit of charity but the spirit of fun; his excitement is infectious as he pretends to berate Bob Cratchit for taking Christmas off work while trying not to laugh and reveal his gift too soon.

I’m new to San Francisco, so I have never seen this ten-year-old show before. But I imagine everyone who has will be back, and newcomers should flock to see it as well. It’s a performance full of carols, original music, dancing, and of course a feel-good story, all delivered by an energetic troupe of actors of all ages. You’ll leave the theater feeling wiser, more generous, and excited for the holidays.