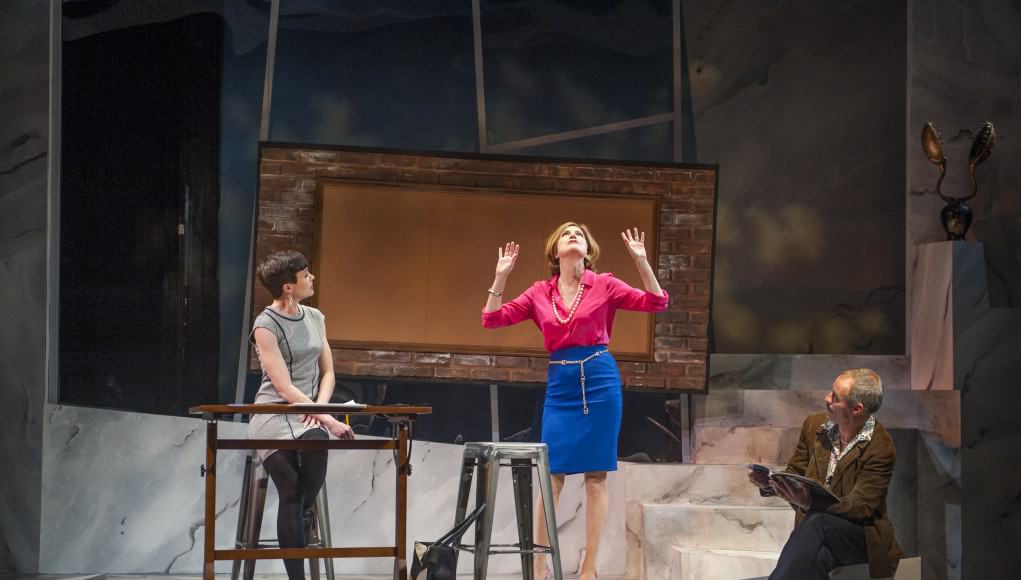 What’s the price of success? Of money, fame, genius, art? In Amy Freed’s The Monster-Builder. Gregor is a superstar architect in the middle of a big project: the Abu Dhabi Tower of Justice and Interrogation. But the inspiration isn’t coming. A human sacrifice is required. Enter—or rather, exit—Gregor’s escort-turned-partner Tamsin, to the dramatic strains of Verdi’s “Dies Irae.”

But this is no murder mystery. If it fits into any genre, it’s a dark comedy, a self-conscious cross between Ibsen’s Master Builder (from which it takes its name), Rand’s Fountainhead, and Shelley’s Frankenstein. Gregor spouts hilarious grandiose pseudo-intellectual architectural babble that Freed clearly had tons of fun writing. Residences are “vernacular structures”; the kitchen is the “feeding and foraging area”. And heaven forbid anyone spills salsa on Gregor’s new glass house’s unsealed Carrera marble!

Horrifying visions of the future and all, The Monster-Builder is the funniest play—new or old—I’ve seen in years.

The play’s apparent serious turn only makes it more absurd. In the midst of an argument, Dieter suddenly tells his wife Rita (both architects and friends of Tamsin) that Gregor is far older and far more ominous than he seems. What follows is a revenge plot ripped from Macbeth, comically averted, and Rita’s possession by an architectural model. It’s all uproariously funny. I can’t help thinking there might be a subtler way to reveal Gregor’s identity than a heavily shadowed ghost story and a slide of Gregor palling about with Hitler. Then again, when you name your main character’s firm Final Solutions, subtlety is probably is not the goal.

A talented cast at Aurora Theatre Company holds the show together through all its twists and turns. As Gregor, Danny Scheie’s manages an elusive combination of self-awareness and earnest pretention. His sarcasm and ego are oversized yet utterly believable. Sierra Jolene plays his partner Tasmin with great physical flexibility and a spot-on gratingly empty-headed demeanor, interspersed with flashes of intelligent insight. (She is, after all, the key to the discovery of Gregor’s dark identity.) Tracy Hazas’s Rita is an endearingly earnest young career woman, torn between artistic ideals and material success. As her husband Dieter, Thomas Gorrebeeck sometimes seems to struggle not to burst out laughing at the ridiculousness of what he is saying. But he holds it together, infusing his big reveal monologue with nice melodramatic flair. Finally, Rod Gnapp and Nancy Carlin don’t miss a beat as graceless emblems of a tasteless one percent. All are directed well by Art Manke, who keeps the timing crisp despite the script’s occasional unevenness.

Freed’s play ultimately doesn’t take a stance on the architectural questions it raises. Rita claims that “people need to be defended… from architects” and works for the preservation of old structures and of craftsmanship. But she allies herself with a rich couple who build “old European-style” condo complexes and name their third house “Casa Chateau.” Gregor is unambiguously evil. Still, perhaps he has a point when he disdainfully asks, “Who is going to stand between people and their preferences?” I’m no lover of Bauhaus (which Gregor supposedly co-founded before abandoning the movement because it was “too soft”), but I shudder to think of a world full of nothing but tiny, over-ornamented Mozart suites with fake marble statues built from packing peanuts.

Horrifying visions of the future and all, The Monster-Builder is the funniest play—new or old—I’ve seen in years. There are plenty of cheesy moments, but there’s never a dull one.