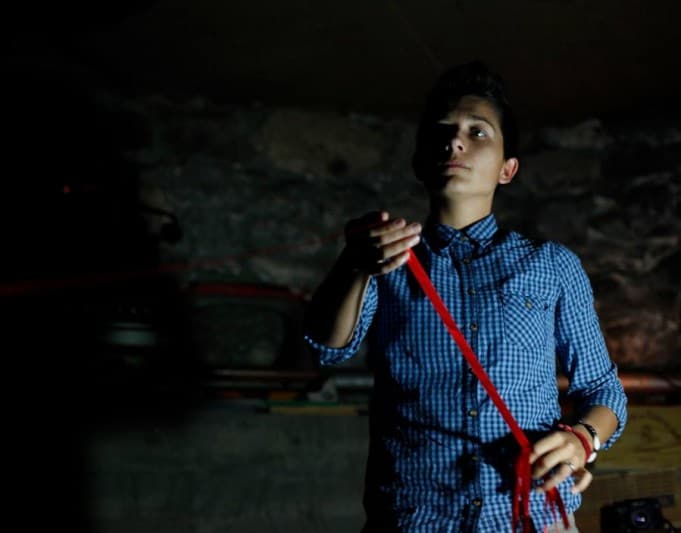 Armen Ohanian was clearly a fascinating person whose story deserves to be told. A genderqueer Armenian over a century ago, she began life as an “honest woman” in an upper-class family but pursued a career as an artist. She danced on tour in Europe, wrote poetry, and composed Orientalized memoirs for popular Western consumption. Dear Armen tells Armen’s story through the eyes of a modern trans* Armenian, Garo, who is studying Armen as part of her doctoral research.

As a natural result of this framing device, the text sometimes feels heavy and academic. Garo (Lee Williams Boudakian) shares a lot of historical facts about both Armen herself and the political history of the region. These are broken up by quotes from Armen’s poetry and dance performances by Kamee Abrahamian, inspired by Armen’s own dance career and ranging from traditional to provocative. Like the rest of the play, they are underscored by a combination of recorded music and Haig Ashod Beylerian’s live electric guitar.

The most unsatisfying portions of the show are the interactions between Garo and the relative she is visiting. Those conversations have the potential to be the emotional core of the show, but in practice are drily repetitive: they always cover the same ground of intergenerational misunderstandings and Garo’s frustrations with their family’s unwillingness to recognize their gender identity. While the repetition of this issue rings true, it doesn’t make for as fascinating theater as a wider variety of topics.

As Garo’s “auntie,” Kamee Abrahamian does a wonderful job of scolding the audience into helping her out. It’s interactive theater lite—we’re not called on to do much other than lift our feet or unzip a dress or chop an onion—but it adds a nice sense of connection between the performers and audience. That, plus the choice of the intimate Theater of Yugen space, ensures consistent engagement with the show.

Dear Armen is still being workshopped, and it shows. Some transitions were rough, and the ending felt abrupt and unresolved. Still, I was happy to have seen the show for the learning experience it provided, and I believe it tells an important story. As the play continues its tour in Berkeley and the Pacific Northwest, it should continue to develop and grow into a strong, memorable piece.