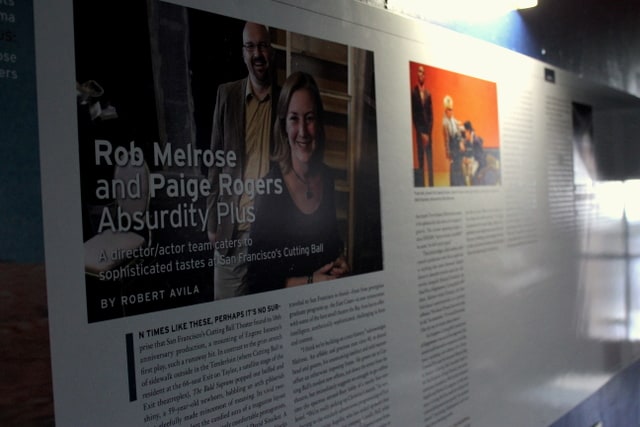 Cutting Ball Theater in San Francisco (277 Taylor Street at Ellis) has announced its 17th season line-up. All the details below. Tickets go on sale in August.

The Risk is This… The Cutting Ball New Experimental Plays Festival (say that ten times as fast as you can) returns with three new works in staged readings that push the boundaries of what theater can be.

The season closes with August Strindberg’s A Dream Play in a new translation by Paul Walsh. In addition to the main stage season, Cutting Ball Theater continues its Hidden Classics Reading Series with three new installments.

We’re told that the entire season is dedicated to the theme of “Dreams.”

“Dreams connect people of all cultures and backgrounds and are one of the things that make us human. Since the premiere of August Strindberg’s A Dream Play in Stockholm in 1907, new forms of dramaturgy have mirrored the structure of dreams,” said Cutting Ball artistic director Rob Melrose. “These experiments lie at the core of Cutting Ball’s work and we know that it is sometimes daunting to audiences who are not used to it. By looking deeply at dreams this season, and how the theater can explore them, we pave a way for people who are not familiar with experimental plays to enter our work.”

Melrose notes he will be taking a sabbatical next season, with Paige Rogers stepping in as acting artistic director.

LIFE IS A DREAM

Cutting Ball Theater opens its 17th season with LIFE IS A DREAM. First published in 1635, LIFE IS A DREAM is a philosophical allegory regarding the human situation and the mystery of life. Often described as the supreme example of Spanish Golden Age drama, it tells the story of Segismundo, a Prince of Poland, who has been imprisoned in a tower by his father following a prophecy that the prince would bring disaster to the country and death to the King. When the prince is briefly freed and goes on a rampage, he is put back in jail, and persuaded that his momentary freedom was all a dream. Wrestling with free will and fate, LIFE IS A DREAM remains one of Calderón’s best-known and most studied works. Following the sold-out success of Antigone, Acting Artistic Director Paige Rogers helms this Calderón classic, in a new translation from resident playwright Andrew Saito commissioned by Cutting Ball.

Subtle, lyrical, and daring, ONDINE retells The Little Mermaid and Pelleas and Mellisande myths as a transformational first-love story that is heartbreaking, haunting, and hypnotic. A water sprite leaves the sea to join her lover, an alchemist-knight on a quest for the universal solvent. Desperate for him after he leaves her alone, she curses him: if he falls asleep, he will die. To her dismay, he returns moments later, and the two fight sleep together by telling each other their love story. The narrative they frame comes to life until layers of time and reality collapse in on one another and dissolve into a beautifully tragic dream.

This year’s festival features three new works in staged readings that push the boundaries of what theater can be.

A light flickers on. A young girl’s universe ruptures. In a desperate search for answers, will she find redemption or be carried away by the conflicted world around her? all of what you love and none of what you hate explodes our contemporary culture in a symphony of sound and social media.

MY HOME IS WHERE

When a cryptic but ominous letter arrives from her brother on the oil fields, thirteen-year-old Cozbi sets off for Valdez, Alaska to find him. Armed with a book by Donald Trump and an axe, Cozbi battles her way through the Arctic wilderness, squaring off against a host of monstrous Ass-Hats on each rung of the corporate ladder. Part mythic journey, part workplace satire, BOREALIS is a darkly comic adventure about family obligation, career aspiration, and what we leave behind to make our way to the top.

Written by August Strindberg
In a new translation by Paul Walsh
Directed by Rob Melrose
May 20 – June 19, 2016
Gala opening: May 27

In A DREAM PLAY, Indra’s daughter comes down to earth to better understand the plight of humanity. Through this surreal journey, she meets an officer, a lawyer, and a poet, and experiences joy, excitement, pain, and suffering. Strindberg structured this play using a dream logic that was later adopted by Expressionist playwrights. Paul Walsh, who translated all five plays in Cutting Ball’s 2012 Strindberg Cycle: The Chamber Plays in Rep, provides this translation of one of Strindberg’s most admired and influential dramas. Cutting Artistic Director Rob Melrose, who directed all of the plays in Strindberg Cycle: The Chamber Plays in Rep, helms A DREAM PLAY.