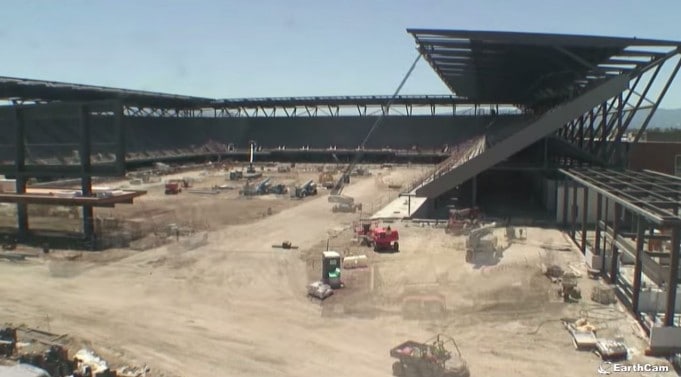 Levi’s Stadium in Santa Clara has received its fair share of attention of the past year, but just a short drive south down Highway 101 is another marvelous new sports structure.

Home to the MLS San Jose Earthquakes team, Avaya Stadium–18,000 seat capacity–welcomed fans for the first time last week. By all accounts it was a successful opening. The quakes won the game 2-1 (against the Chicago Fire). And reports suggested that the atmosphere was “electric” and “fantastic” — with virtually no hiccups that usually accompany the opening of major stadiums.

Earthcam has now released a time-lapse video showcasing the construction of the $100 million stadium. The 90-second video starts with a view of barren space, just soil, dirt and empty land, before showing the breaking of ground, materials being moved in, and the facility being built. At the tail end of the video you can even see the opening day festivities and the Earthquakes game in the background.

Interesting but of trivia, turns out Avaya Stadium features, at 3,647 square feet, North America’s largest outdoor bar. Though architect Brad Schrock didn’t originally intend it that way, the Beers of the World section at the south end, with Eurpoean-style roofing has become an immediate hot spot for fans.

Construction broke ground on October 21, 2012, with over 6,200 people on hand to dig into the ground, setting a Guinness World Record in the process.

Built specifically for soccer, the new stadium will host the United States women’s national team, who will kick of their 2015 World Cup bid on May 10, 2015.