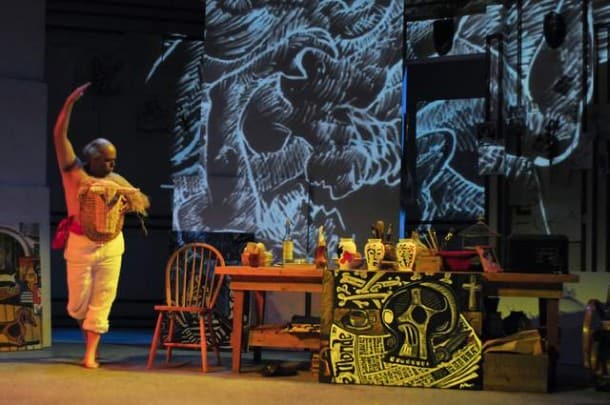 Actor/writer Herbert Siguenza of the powerful and politically renown theatrical troupe Culture Clash created the original play A Weekend with Pablo Picasso at San Diego Repertory (in 2011) and stars as Pablo Picasso, the most influential artist in modern history. In the 1957 artist’s studio in southern France, the artist paints and speaks and directly to the audience.

From Clinton Stark’s review of Picasso:

The show’s premise is positively brilliant: we’re a (somewhat unwelcome) guest staying in Picasso’s home and studio in 1957 as he attempts to paint 6 canvases and 3 vases for a client by Monday morning — an impossible opportunity to get a first hand look at a prolific master at work. Who do they think I am, Dali?! We witness the creative process in action, up-close, and watch as the now 76-year-old painter perpetually fights off interruption — be it a phone call, unexpected delivery, or just our very presence — pontificates about life and art, and recounts stories of love, friendship (Matisse) and food. If you didn’t know Picasso, the man, before, you will after this thoroughly engaging 80 minutes of radiant theater.

Picasso tells us that our work “must be the ultimate seduction, the ultimate pleasure.” In my weekend with Picasso I saw what happens when a life is not a dichotomy – when it is pure expression. It makes for a stimulating, engaging evening of theater.

“Six paintings in three days? Who do you think I am—Dali?”

A WEEKEND WITH PABLO PICASSO