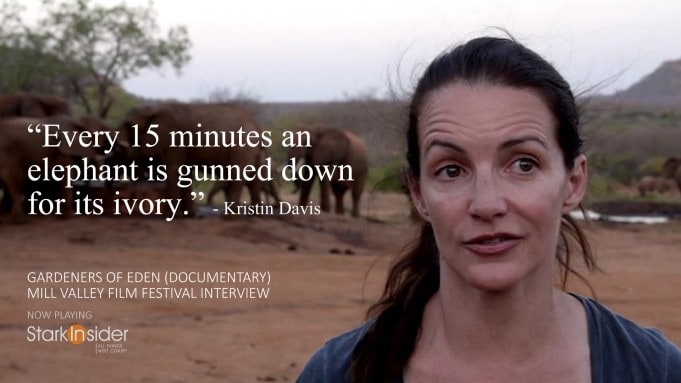 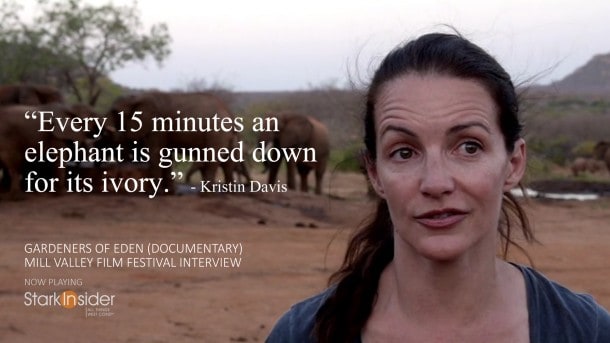 “Every 15 minutes an elephant is gunned down for its ivory.”

If we don’t do something about it, says actress Kristin Davis (Sex And The City), the elephant could become extinct in ten to fifteen years.

It’s eye opening, and heart wrenching, stuff. Kristin’s new documentary, Gardeners of Eden, which she produced, gives viewers and up-close and personal experience on the ground in Kenya where the elephant population has fallen from over 10 million in 1900 to an all-time low of 300,000 today. The film premiered at the Mill Valley Film Festival where I caught up with the busy actress and shot an interview (see below) to learn more about the crisis.

Kristin tells me she fell in love with the animals as a young girl. At four years old she was gifted a toy elephant that at the time, “seemed bigger than myself.”

In 2009, when visiting friends in Kenya, she came across an orphaned elephant. She knew she just had to get the word out, and it became her life’s mission. Fortunately she was able to team up with filmmakers Austin Peck and Anneliese Vandenberg who spin a sad and tragic, but equally beautiful and hopeful 60-minute account of those on-the-ground heroes (from the David Sheldrick Wildlife Trust) who dedicate themselves to stopping poachers (“It may result out of an ambush” or “identifying footprints” from poachers too careless to conceal their tracks).

And how to solve the poaching problem?

ENDING THE CRISIS – A GLOBAL EFFORT

Other high profile celebrities and political figures have used their influence and power to help end the elephant poaching crisis.

Recently, Chelsea Clinton visited Tanzania in Africa and wrote about the experience and her thoughts as part of the Clinton Foundation:

“According to a recent Washington Post article, Savannah elephant tusks sell for up to $1,000 per pound, with forest elephant ivory often fetching an even higher price given its prized pinkish hue.”

“To help end this crisis, we need a complete systems change and we need to recognize that elephant poaching exists within its own market system – we need to stop the killing, stop the trafficking, and stop the demand by educating end consumers.”

It may be easier said than done, sadly. It’s her dream though that everyone that hears the news will want to help out — even following her lead, and adopting an orphaned elephant.

Learn more about the crisis in this interview with Kristin Davis which includes clips from her new documentary Gardeners of Eden.

To learn more how to help visit The David Sheldrick Wildlife Trust.