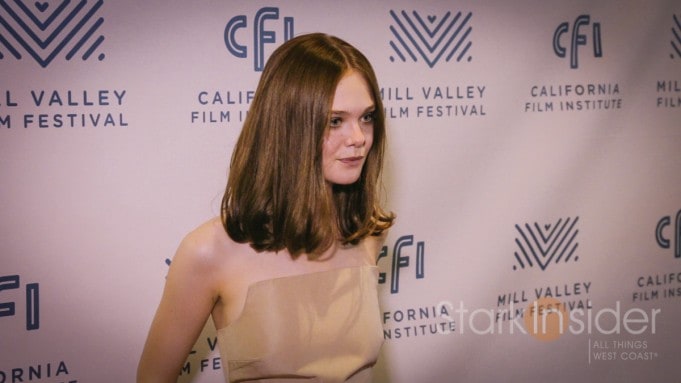 Elle Fanning is one to watch. An emerging star, at only 17 she’s not only performing alongside Hollywood heavy-hitters–Glenn Close, Angelina Jolie, Scarlett Johansson–but she’s seemingly making all the right decisions when it comes to choosing projects. Her latest, Low Down, is the perfect example.

The Jeff Preiss indie biopic is most definitely not lightweight fare. Based on Amy Albany’s memoir, the film follows the trials and tribulations of singer Joe Albany during the 1960s an 70s jazz scene. Most notably, his battle with drug addiction adds to an already complex relationship with his daughter – played by Elle.

“I think this is the first time I’ve played a real, live person,” the effervescent (and now brunette) actor told Loni Stark at the Mill Valley Film Festival premiere. “This is a true story. She [Amy Albany] was on set every single day, so that was a little intimidating.”

True to her reputation as mature-beyond-years, Elle charmed upon arrival at MVFF. Before walking the red carpet and meeting with festival co-founders Mark Fishkin and Zoe Elton, she graciously mingled with adoring fans, signing posters, smiling for photos and selfies. Those who later filled the Rafael Film Center were treated to a special screening of Low Down, followed by a talkback.

Watch the video below as Elle Fanning gives Stark Insider the Low Down.