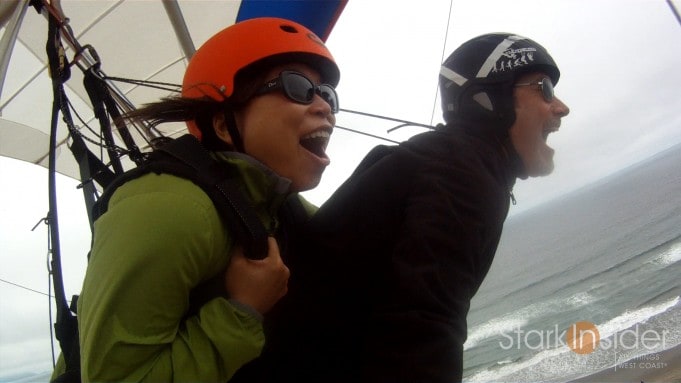 And here I was thinking I had seen it all!

Such were just a few of my reactions when I hooked up with John Simpson at California Hang Gliding. The resident hang gliding pro took me up on a tandem flight that I won’t soon forget. As you can see in this Stark Insider video segment, there’s moments of pure exhilaration, especially during take-off and landing, combined, surprisingly enough, with moments of outright zen.

Fortunately for me (and my sister Wendy who went on a tandem flight also, right after mine), the weather on this day was idyllic. The wind was smooth and predictable as evidenced, as I learned, by the wind orange sock seen flying parallel to the ground. Thankfully there was enough cloud cover to prevent the sun from impeding vision.

I’ve always wanted to try hang gliding. I suspected it would be the closest I could come to actually flying. A few years back I jumped out of plane. Skydiving is visceral, and a rush, to be sure, but it wasn’t quite the “flying” experience I was hoping for. In fact, perhaps the most exciting part was the actual ascent, in a small prop plane, with door wide open, and wind whistling around the cabin – that, plus the building excitement made for one of life’s unforgettable moments.

My thanks to John who proved to not only be a great instructor, but also an accomplished on-camera personality. Plus, his seasoned GoPro technique helped to forever capture this day in dramatic fashion.

If you’re like me, and work long Silicon Valley hours, frequently travel, and find yourself immersed in a seemingly never-ending email inbox, here’s a prescription… try it and I suspect you’ll look at the world differently, maybe get inspired with a creative idea or two. At the very least you’ll enjoy some amazing views, and be able to breathe, in the words of Mark Twain, some of that “bracing and delicious” angelic air.