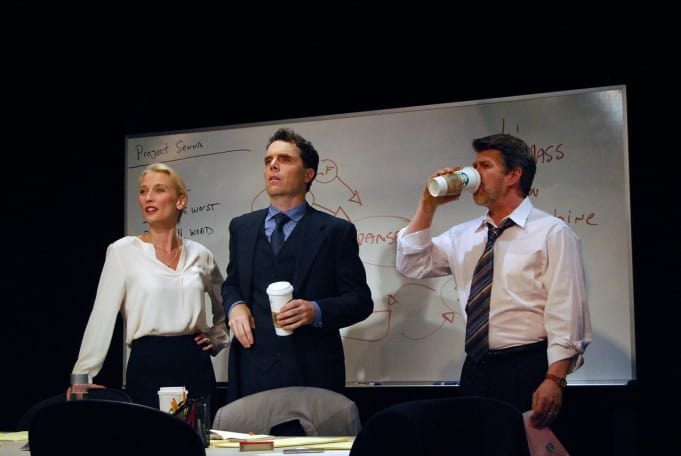 Artistic director Bill English and the San Francisco Playhouse team have revealed their 2014-2015 season and it looks like a creative and artistic doozie. Net-net: mark down these dates. If you love live theater, there’s a lot of interesting fare coming your way.

“This twelfth season features a selection of plays that underscore our commitment to exploring new, edgy contemporary work,” notes English in the announcement.

The world premiere of Aaron Leob’s Ideation kicks off the season. That’s followed by a TBA show, and then: Tree; Stupid F##king Bird; and another world premiere with Richard Dresser’s Trouble Cometh. The musical revival Company closes the season.

The theme of the new season is “The Moment of Truth.”

“All of us can look back at times when our lives irrevocably changed course, tipping points when everything transformed,” the email announcement explains. “These are the moments that define us. And not just as individuals, but as communities and cultures.”

Aaron Loeb brings a dark comic edge to this psychological suspense thriller, in which group of corporate consultants work together on a mysterious and ethically ambiguous project. As the lines between right and wrong are blurred, they navigate the cognitive dissonances and moral dilemmas to decide for themselves if everything is as it seems.

“I set out to write a play about race and ended up writing a play about family,” says playwright Julie Hebert about Tree, “About the inescapability of family, of being known over time, of recognizing yourself in others, of continuing relationships after betrayal and suffering. We keep each other honest. Sometimes it’s funny, sometimes painful – and so it is with this play.

March 17 to May 2 (opens March 21, 2015)Written by Aaron PosnerDirected by Susi Damilano You’ve never seen Chekhov like this.  Aaron Posner’s irreverent update of “The Seagull” lets us into a country house where unrequited desire is drowned in equal parts alcohol and sarcasm.  In true Chekhovian fashion, actresses, playwrights, doctors, and novelists bare their souls as they search desperately for the truth of love and art.

May 12 to June 27 (opens May 16, 2015)Written by Richard Dresser
Directed by May Adrales A comic thriller about a reality TV show where the boundaries between fiction and fact, life and death, are dangerously blurred. Also skewering the effect of the information age on the nature of identity

Married life and its alternatives are celebrated in Company, Sondheim’s groundbreaking musical comedy set in Manhattan. As yet unable to make a commitment of his own, Robert supports his married friends and hears about the ups and downs of their relationships.