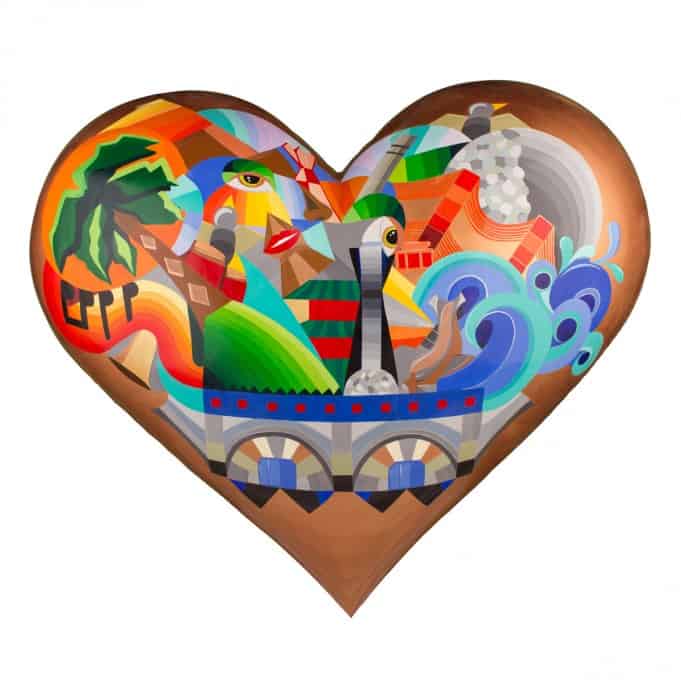 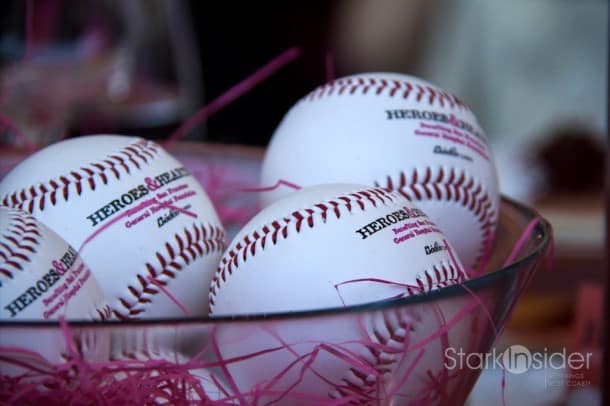 We Heart San Francisco – pay it forward. And what better way to show your love for our city then to support a good cause?

According to organizers, once again the hearts you see below will be auctioned and sold to raise money for ital programs. If you’re around Union Square in the coming months you may even see some of the hearts exhibited.

“The new heart designs and mini-mosaics exemplify the diversity of our community and those served by The General,” says Lisa Hauswirth, Co-Chair of Heroes and Hearts and Hearts After Dark. “At this year’s events, we look forward to commemorating the 10 year anniversary of the Hearts in San Francisco project and celebrating the important role The General plays to the City and County of San Francisco.”

Take a look at these incredibly beautiful designs. They may well just be the most inspiring group of artists yet! Be sure to spread the word, this is a wonderful San Francisco tradition that drives support for the General.

IN PHOTOS: Hearts in San Francisco 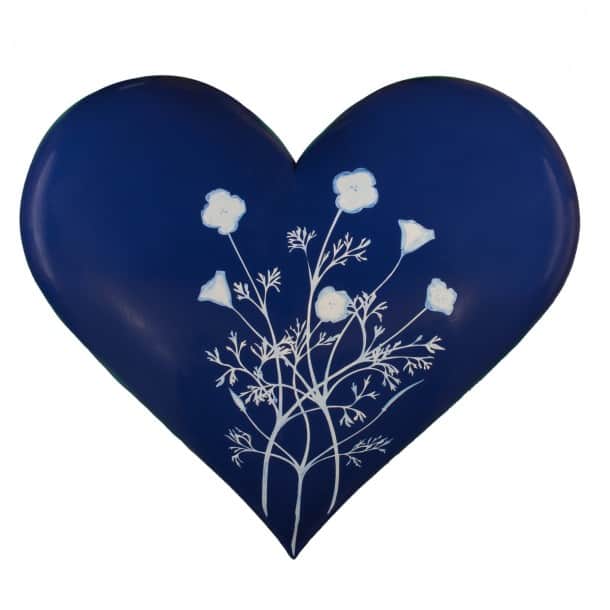 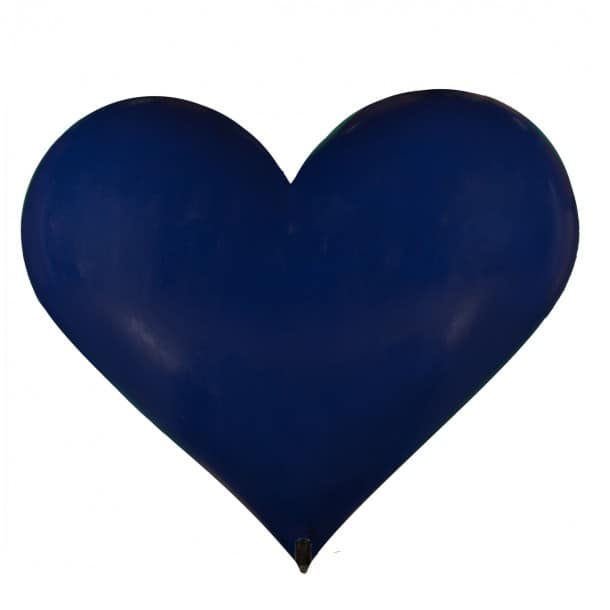 Shannon Amidon is a photo based mixed media artist from the San Francisco Bay Area, and she is contributing “Wild Poppies in the Twilight Rain” to this year’s series. Her artwork explores the beautiful, repulsive, and mysterious sides of natural history. While the world is speeding forward with technology and convenience, she prefers to slow down and use alternative photographic processes, including historic printing and non-traditional techniques. She was the 2011 Arts Council Silicon Valley Artist Laureate, receiving a Fellowship Grant in photography. She was also the recipient of an Eco Art Grant and studio makeover from the Art Inspector part of the Zero One Art and Technology Network. Her artwork has been exhibited throughout the U.S., in South Korea and in Costa Rica. Shannon is active in her local arts community, contributing her time, knowledge and art whenever possible. She is also involved in education outreach for children and young artist mentoring. 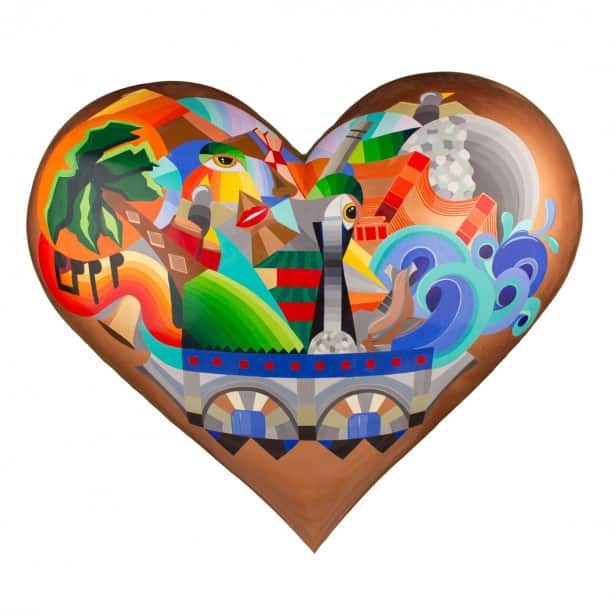 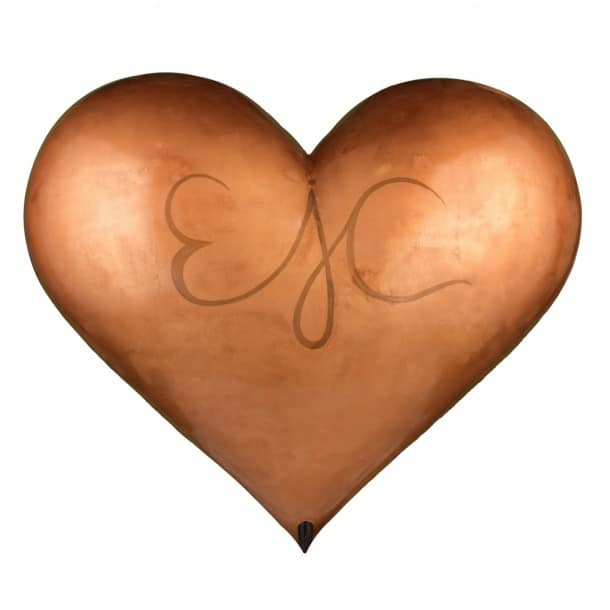 Erica’s heart, “Abstracting Sights”, uses acrylic and polyurethane paints to display San Francisco’s Coit Tower and Golden Gate Bridge, among other sights, in her unique personal style. She is a self-taught painter who was born and raised in the vibrant Mission district of San Francisco. Being the daughter of two Salvadorian immigrant parents, she naturally draws inspiration from her humble and rich Hispanic heritage. However, Erica’s number one source of inspiration grows from her incomparable and colorful neighborhood, La Mission. Working with the full color spectrum of acrylic paints as well as her signature shimmering iridescent paints, she creates animated pieces that depict a balance of sorrowful struggles and a brilliant happiness. 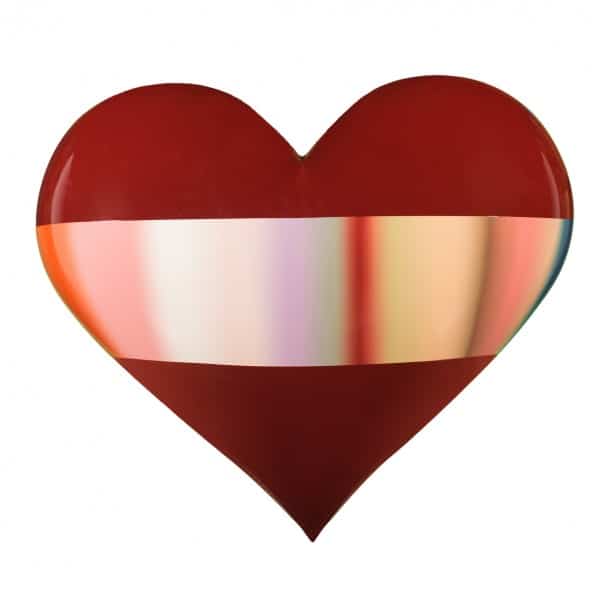 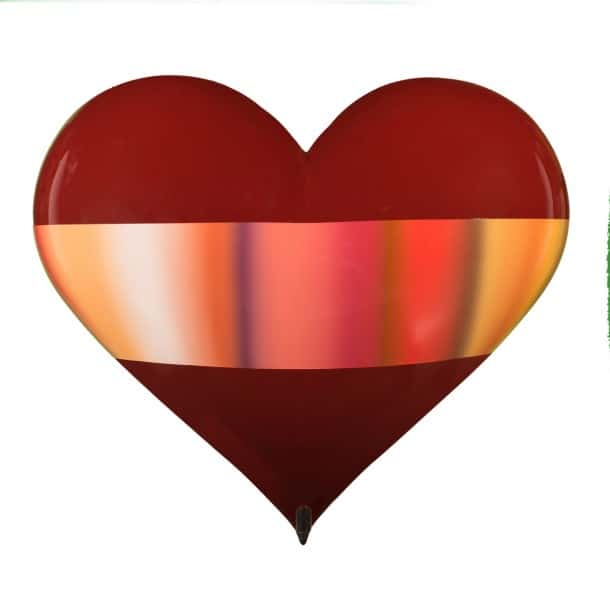 Patrick’s piece is titled “Open Heart”. Born in San Francisco, California, Dintino grew up in Sunnyvale, in the southern bay area. He earned his BA in Industrial Arts from San Diego State University in 1988. He co-founded the Artists in Motion art collective, a group of artists who created funk-art fashion, sculpture, and furniture out of reclaimed material. In 1994, he returned to the Bay Area. He earned his Master of Fine Arts degree from California College of the Arts (CCA) in 2001. He has been a San Francisco Museum of Modern Art Society for the Encouragement of Contemporary Art Award winner and a Pollock-Krasner Foundation grant recipient. He recently participated in a group show called “The Future of Abstraction” at the Chelsea Art Museum in New York and currently teaches painting at CCA. 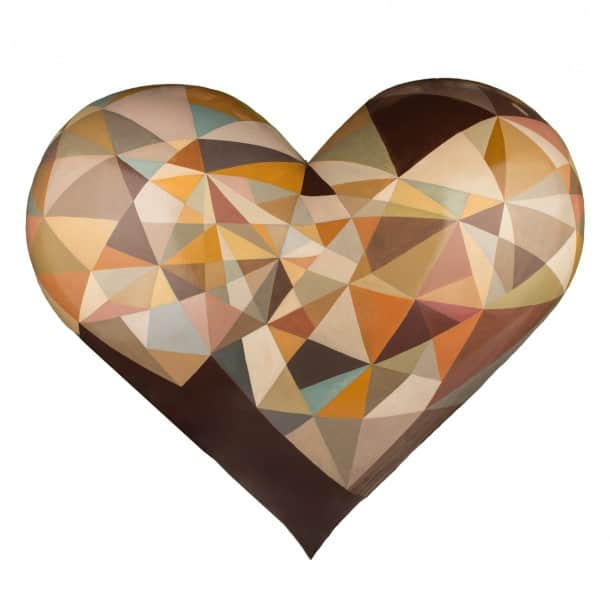 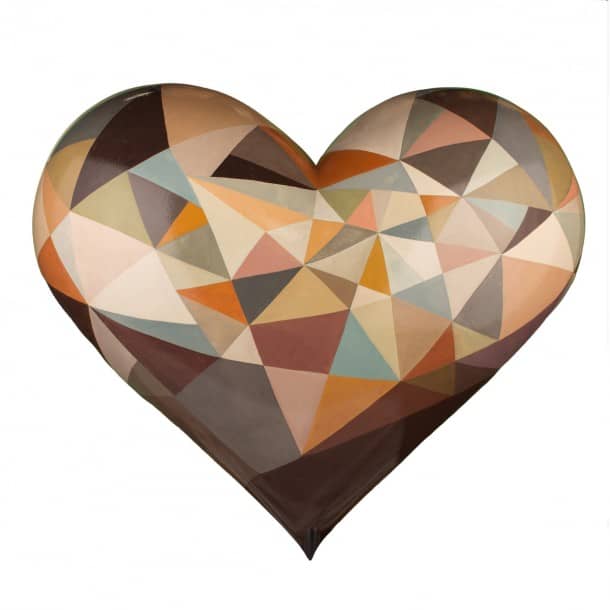 June Li calls her heart “Social Network”, and it features a stained-glass like assortment of blue, yellow, orange and brown hues, reflecting both the darkest and brightest shades of her human experience. She is a Chinese American artist who, in 2007, removed herself from the misery of an eight-year arranged marriage and moved from Sonoma to San Francisco, where she found happiness and artistic inspiration among its streets and people. Her life story is one of independence, bravery, and the hope that a person can begin life anew. She was traditionally trained in art in China, earned her Bachelor of Fine Arts from Sonoma State University and began to explore more expressive and abstract work after she moved to San Francisco. Her artwork is displayed in numerous San Francisco Bay Area public venues and private collections from China, Florence, and London. She is a member of Art Span, Explosion Studios, and Mission Artists United.

Having designed hearts in 2004, 2006, and 2007, Michael Osborne has returned to contribute an ice-cream sundae themed heart with the title “Happy 10th Anniversary!” to this year’s series. Michael is President and Creative Director of the San Francisco-based graphic design firm, Michael Osborne Design, Inc. The firm’s work is on display in the permanent collections of the San Francisco Museum of Modern Art, the Cooper-Hewitt National Design Museum in New York, and the National Postal Museum in Washington, D.C. Michael personally designed the 2002 and 2004 Love Stamps for the USPS. He graduated with honors from Art Center College of Design in 1978. He has been a faculty member at both the University of California at Berkeley and The Academy of Art College, where he currently teaches Package Design. 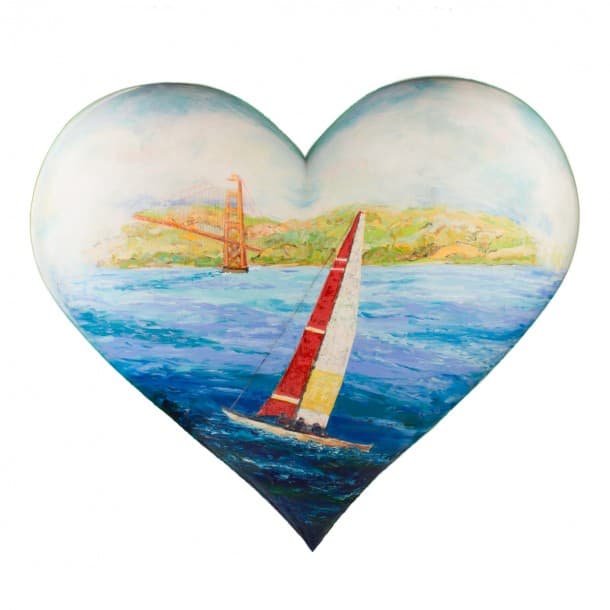 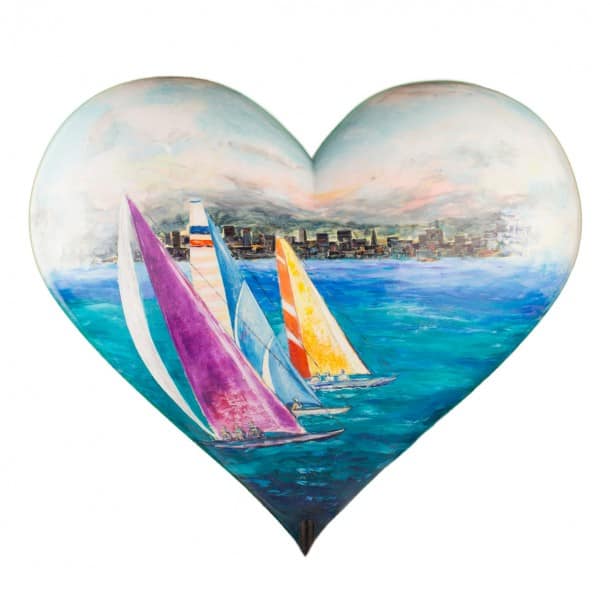 Marius Starkey is an American painter who has dedicated his life to expressing his understanding and vision of landscape, people and nature using rich colored paint in his images. The act of painting has carried him through life, arousing insight, energy and joy. His contribution to this year’s series, “Sails of the Bay”, uses acrylic paint and varnish to picture some of the vessels that took the San Francisco Bay by storm in the summer of 2013. His work has featured frequently in solo exhibitions across the country and around the world and holds places in the private collections of San Francisco’s Mexican Museum, the Helen Foresman Spencer Museum of Art in Lawrence, Kansas and Sprint’s World Headquarters in Kansas City, Missouri. 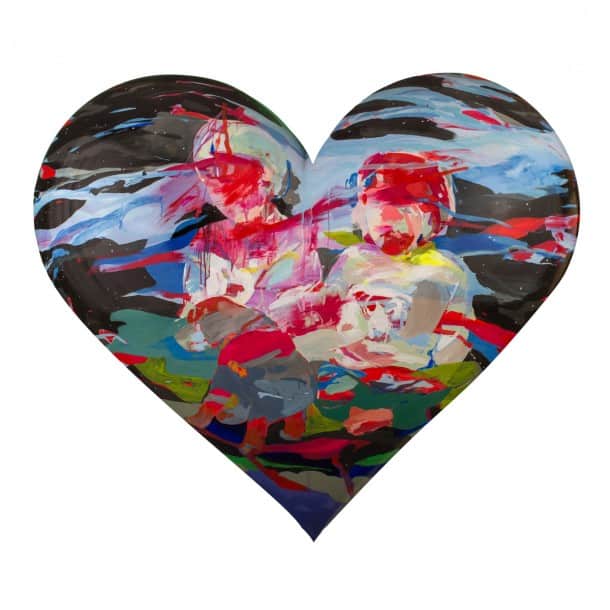 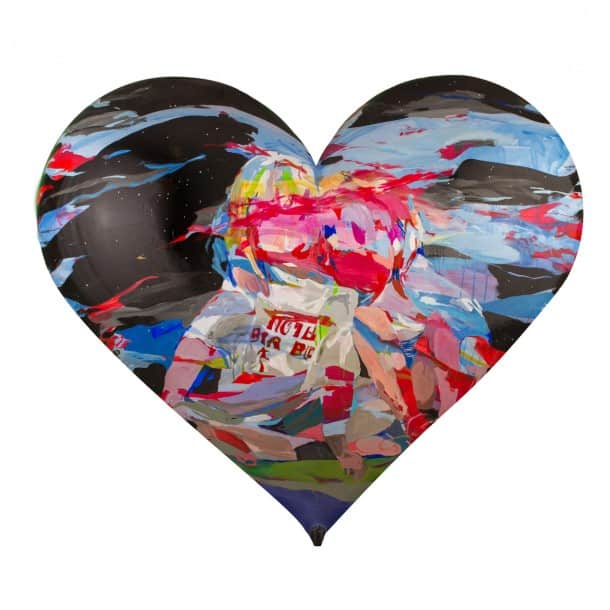 “Bloodlines” depicts a pair of sisters and their dog silhouetted in white with a black background, blue hues and red slashes across each side, representing the family bond. Emma Webster is a recent graduate of Stanford University, having earned her BA in Studio Art in 2011. She also studied painting at the Slade School of Fine Art in London, I’École d’Art Plastique in Paris and the Academy of Art University in San Francisco. She has received such prestigious awards and grants as the Raina Giese Award in Creative Painting (2011), the Undergraduate Academic Research Angel Grant (2010) and the Academy of Art University Award for Best Figure Drawing (2006). She currently lives and works in Oakland. 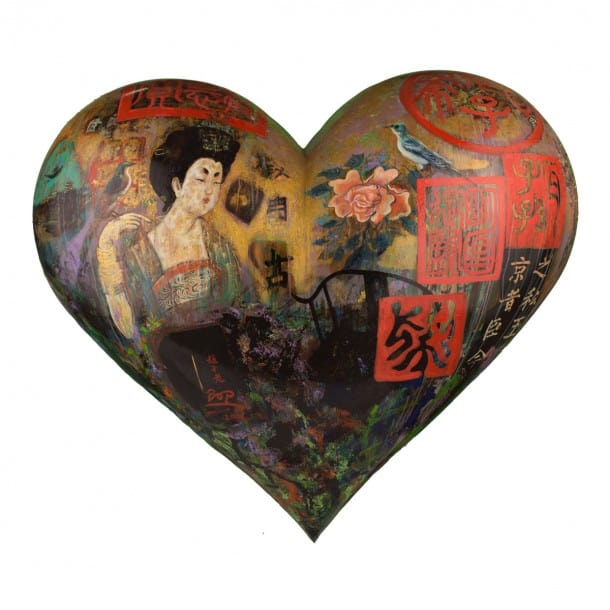 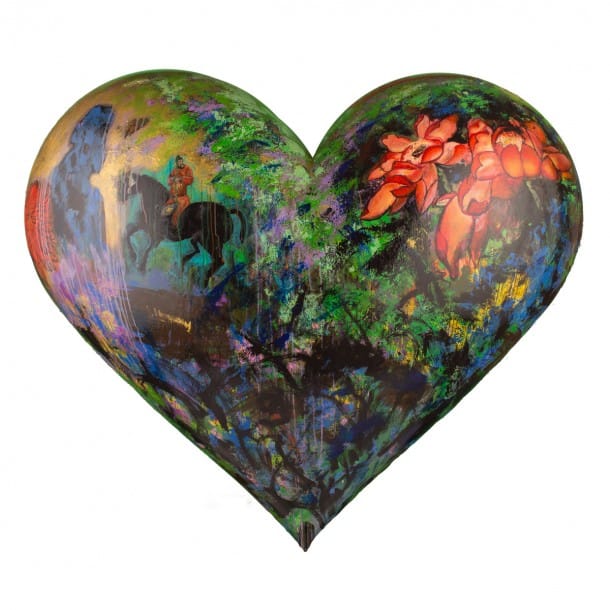 Pop Zhao is one of the most accomplished and controversial artists to emerge from China in recent years. His heart, “Dynasty Memory”, uses acrylic paints. An honor graduate from the prestigious Central Academy of Fine Art in Beijing, he has exhibited widely and collected many awards and scholarships during his career as an artist. For the past twenty-five years, he has lived in San Francisco.  In 2003, he wrapped the new Asian Art Museum with 22,000 square feet of canvas for its grand opening and was the first artist to show his work in the new Asian Art Museum. In 2005, Mayor Gavin Newsom appointed him as the Art Commissioner of the city and county of San Francisco. In 2008, he was the opening artist for the Beijing Olympic Games and created “Olympic Dragon”, an eight-mile long work of earth-art unfurled on the Great Wall of China. 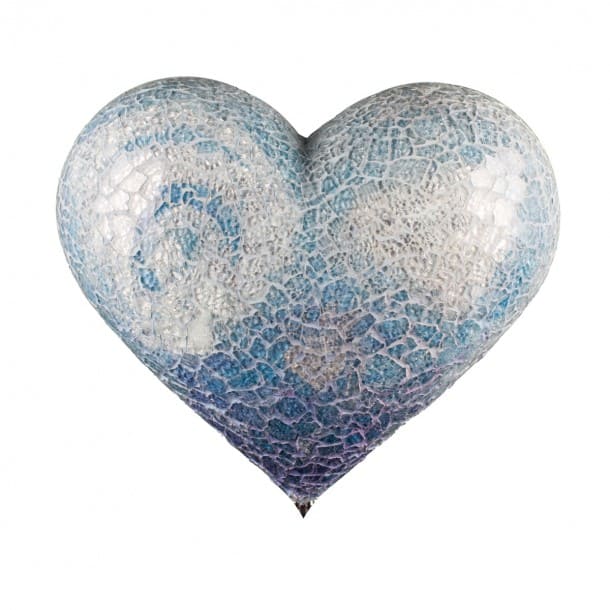 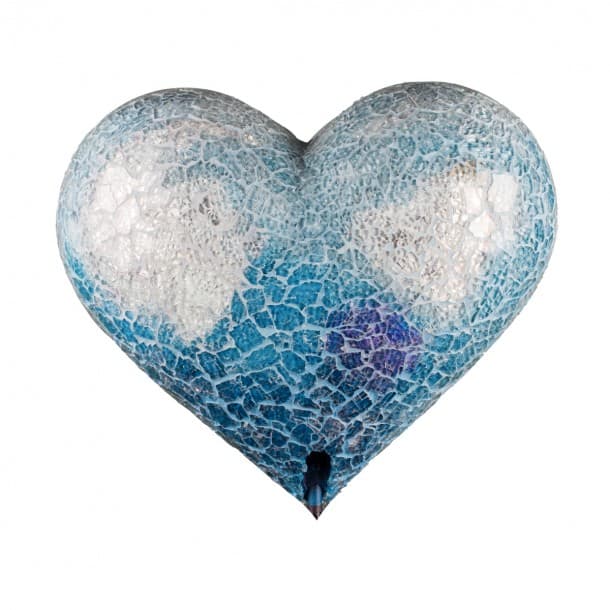 Christine Arthur is an artist and designer living in San Francisco with a background in sculpture, photography, and design, which she studied a UC Davis. Her “Blue Heart” is a tribute to the heroes that saved her mother’s life this year from an aortic dissection and mitral valve failure. Christine currently works at Wells Fargo as a Brand Program Manager. Her passions for art and giving back to the community have led her to volunteer for the last six years at the annual Heroes and hearts event to benefit San Francisco General Hospital. 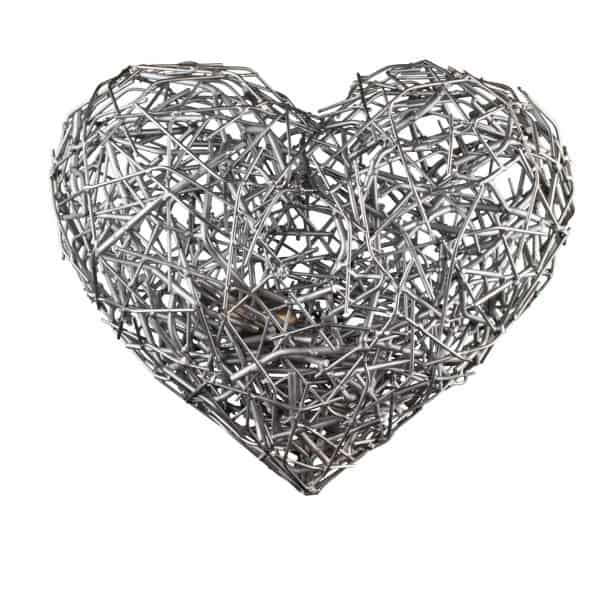 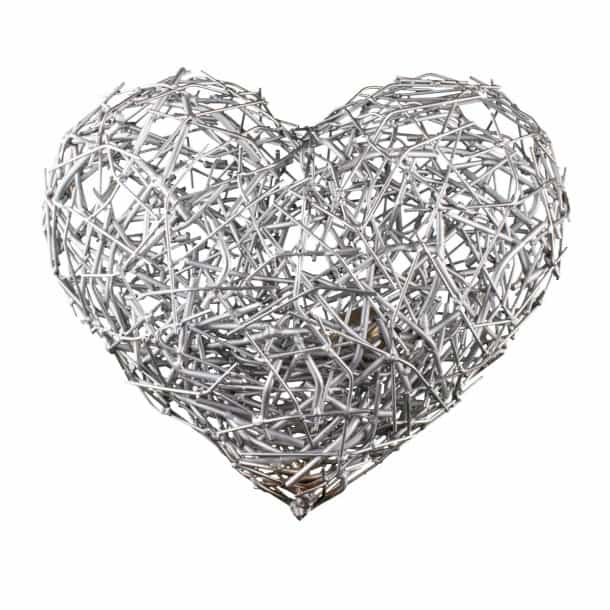 Charles Gadeken has been working as a professional artist in the Bay Area for 20 years and previously designed a heart for the 2012 series. This year, his heart is titled “A Nurtured Nest”, consists of steel and bronze and houses in its center golden, heart-shaped “eggs of hope”. His artistic practice seeks to realize the potential for unexpected magic and serendipity in everyday life. His art pulls inspiration from objects, structures and natural processes in the world around us and transforms them into beautifully crafted sculptures that engage and surprise the viewer. Charles is a founding member of The Flaming Lotus Girls, an artist cooperative, and the founder of The Box Shop, a San Francisco container-based community art space and metal shop that houses over 40 artists and designs and builds custom fire art for individual collectors. 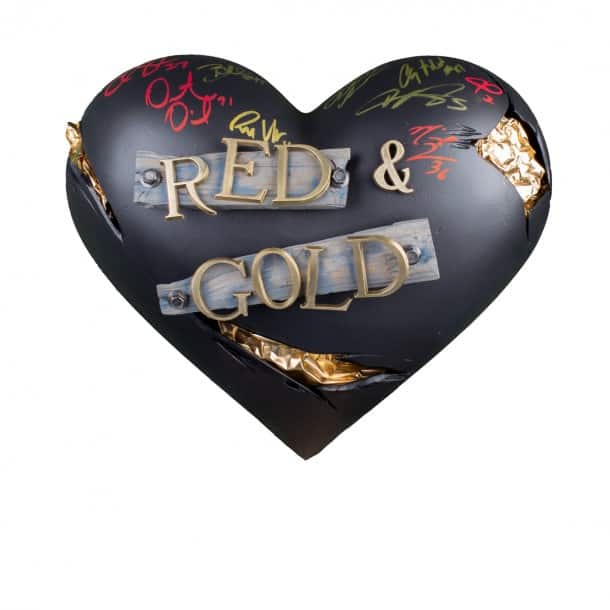 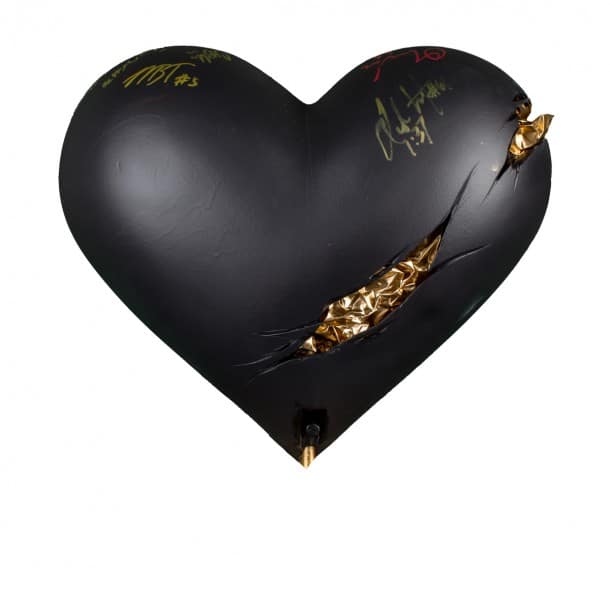 Artist Brit Howard studied at the Academy of Art University in San Francisco, where she received her BA in Sculpture and Printmaking. In 2013, she contributed “Heart of a Giant”, which commemorated the San Francisco Giants’ unforgettable World Series winning 2012 season and featured autographs from members of the team. “Heart of a Giant” sold at auction for $100,000. For this year’s series, Brit has created a San Francisco 49ers themed heart titled “Red & Gold”, which features the autographs of current players.