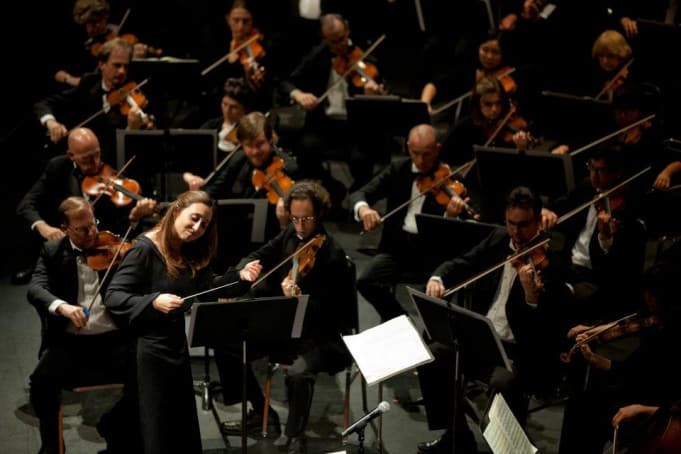 EarShot (the National Orchestral Composition Discovery Network) and Berkeley Symphony have announced a new partnership for the 2013-2014 “Under Construction Program” designed as an opportunity for emerging composers to develop their works with a professional orchestra.

Each will compose a new symphonic work to be workshopped and read by Berkeley Symphony at the Osher Studio in Berkeley on February 2 at 7pm (the first public unveiling of the composers’ works in process) and on May 4 at 7pm (a run-through of the completed pieces).

“Under Construction” has served as an incubator for emerging composers for more than 20 years, offering the unique opportunity to develop skills and gain practical experience in writing for a professional orchestra. Each selected composer will workshop and complete one large symphonic work to be presented at two separate readings, allowing composers the chance to hear their concepts realized and audiences the opportunity to have a window into the creative process. They will regularly meet with composers Edmund Campion and Robert Beaser in private and small group sessions, receive feedback and orchestration lessons from Music Director Joana Carneiro as well as participate in workshops led by key orchestra members. This expanded program is the result of a new partnership with EarShot, a nationwide network of new music readings and composer-development programs. As the nation’s first ongoing, systematic program for identifying emerging orchestral composers, EarShot provides professional-level working experience with orchestras from every region of the country and increases awareness of these composers and access to their music throughout the industry. The program is administered by the American Composers Orchestra (ACO) with partner organizations the American Composers Forum, League of American Orchestras and New Music USA.

Sivan Eldar (b. 1985) is a composer of chamber and electroacoustic works, as well as sound installations. A native of Israel, she has been pursuing her musical education in the U.S. since the age of 15; she holds degrees from the United World College, New England Conservatory (B.M.), and University of California Berkeley (M.A.), where she is currently a PhD candidate in composition and new media. Sivan’s works have been performed in festivals and galleries across Europe and the US, and have been recognized by awards from the Fulbright Foundation, Hearst Foundation, Nicola Di Lorenzo Composition Competition, Dorfman International Composition Competition and Accademia Musicale Chigiana. In addition to working on commissions for ensembles, theater and dance, she currently serves on the composition faculty of the John Adams Young Composers Program and theory faculty of the UC Berkeley Department of Music.

Sivan’s new work A Thousand Tongues, her first for an American professional orchestra, will be read by Berkeley Symphony. Of the piece, the composer says, “I have spent the past year living in Prague, collaborating with local musicians, dancers, and visual artists. The work we created together allowed me to see Prague – its streets, its language, its heroes – through their colorful eyes. To discover secret places, stories and sounds. This composition is dedicated to them. It is both personal and voyeuristic. It is a peculiar hybrid organism – at times sentimental, at times playful, at times frightening – brought to life through the symphony orchestra.”

B. P. Herrington was born in East Texas in 1976. His works have been performed by artists such as soprano Tony Arnold, conductor James Baker, Ensemble Linea, El Perro Andaluz, the London Sinfonietta, the Royal Academy Symphony Orchestra, the New York Youth Symphony and the BBC Singers. He is founding director of Intersection New Music Collective based at Sam Houston State University, Huntsville, Texas, where he teaches composition and analysis. B.P. earned a PhD in music composition at the Royal Academy of Music, London, where he studied with Simon Bainbridge (2001-2004). He also studied with Marc Satterwhite and Steve Rouse at the University of Louisville (1998-2000) and with Frank Felice at Lamar University (1994-1998). He has attended composition masterclasses with Brian Ferneyhough, Mario Davidovsky, Eric Chasalow, Melinda Wagner, Sir Peter Maxwell Davies, Karel Husa, Donald Erb, Helmut Lachenmann, Beat Furrer and Georges Aperghis.

B.P.’s new work for these readings, A Country Lovelier Far, is his first for an American professional orchestra. He describes it as a poem about his native area in East Texas, saying, “The textural and acoustic sound-world is born of the tangled woods and shaded creeks of the Big Thicket. My musical lines teem with voices from my family and my past: the strange ecstatic blend of gospel and honky-tonk I heard as a child in our rural Pentecostal church (where my father led the singing and I played trumpet), the high fervent singing of my backwoods Baptist grandmother and other kinfolk, as well as the songs and folklore of the Big Thicket, still resonant with old Scots-Irish roots.”

Influenced by his background as a math graduate and economist, Amsterdam-born and Brooklyn-based composer Ruben Naeff (b. 1981) writes music that embodies a mathematician’s creativity and discipline, an economist’s public awareness and a music lover’s spark. In collaboration with scientists, cartoonists and newspaper de Volkskrant, Ruben released the album De Bètacanon, a musical canon about the hard sciences. Other interdisciplinary works include The Dancing Dollar about today’s economic crisis and The You Opera, covering the Internet.

Ruben holds master’s degrees in math and composition from the University of Amsterdam and New York University, respectively. He studied with Michael Gordon and Daan Manneke and participated in masterclasses by Louis Andriessen, David Lang, Augusta Read Thomas and Christopher Rouse. He attended the conservatories of Amsterdam and The Hague and the programs of Aspen Music Festival, June in Buffalo, Bang on a Can, Music11 and the UNL Chamber Music Institute. Ruben received the prestigious HSP Huygens Scholarship and grants from the Netherland-America Foundation, Jerome Fund for New Music and the American Composers Forum, the Van Bijleveltstichting and the Fonds voor de Geld- en Effectenhandel. He earned recognition from Wild Rumpus, Ethel/ClefWorks, Golden Hornet, Renegade Ensemble, Hartford Opera Theatre, Center City Opera, Platypus, Andrew Gerlicher and the UvA Cultural Festival.

Of the opportunity to work with EarShot to create his first work for professional orchestra, Ruben says, “I intend to continue my search for a new musical language, test my artistic ideas, and last but not least, have a priceless dialogue with the musicians about both the artistic and the pragmatic side of orchestral writing, during this rare and extraordinary opportunity of workshopping an orchestral work.”

Nicholas S. Omiccioli (b.1982) is currently a residency fellow with the Charlotte Street Urban Culture Project in Kansas City, Missouri. Just recently, Nick was also awarded a residency at Copland House which he fulfilled in October 2013. His music has been performed in Canada, Italy, Austria, Lithuania, the United Kingdom, Thailand, China, New Zealand, Sweden and throughout the United States. Nick has worked with ensembles such as the Jasper String Quartet, Calder Quartet, Curious Chamber Players, le Nouvel Ensemble Moderne, l’Orchestre de la francophonie and the Society for New Music to name a few. His music has been featured at the Aspen Music Festival and School, Great Lakes Chamber Music Festival, (le) Poisson Rouge, Beijing Modern Music Festival, Thailand International Composition Festival, Wellesley Composers Conference, Festivalis Druskomanija, and Domain Forget among others. In addition to receiving many awards, grants, and fellowships, Nick was a finalist for the 2013 Rome Prize in music composition and has received multiple nominations for scholarships by the American Academy of Arts and Letters. His primary composition teachers include James Mobberley, Chen Yi, Zhou Long and Brian Bevelander. He has also had additional study with João Pedro Oliveira and Stephen Hartke. Nick holds degrees from the University of Missouri-Kansas City and Heidelberg University.

Of burning (2013.14), Nick says, “The work I am writing is inspired by my early roots in playing guitar in heavy metal bands. Growing up, I was into groups such as Megadeth, Metallic, and In Flames for their hard edge, driving rhythms, virtuosic guitar solos and melodic hooks. The aim of the work is to exploit the raw, visceral nature of various sub-genres of heavy metal music within the context of an orchestra.”