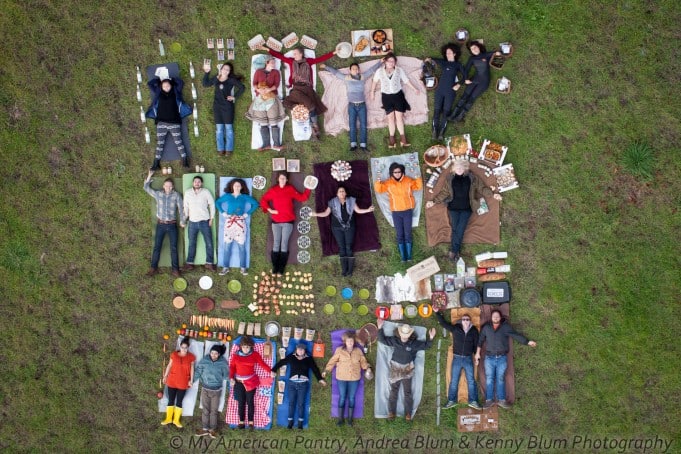 What do you get when you combine local artisan food and drink, an octocopter, and a Canon 5D camera?

Something called My American Pantry.

Journalist and chef turned entrepreneur Andrea Blum’s ambitious project to turn the nation’s wide-ranging tastes in food and wine into an “interactive atlas” would impress even Google. It is you, she says, that creates this American table. And that means we are not able to experience her work, but more significantly to be a part of it.

In my quest to discover and learn about the most creative people that I can find in the San Francisco area little did I realize that My American Pantry (MAP) would send the imagination-barometer off the charts. Local foods? Check. Local wines? Check. Octocopter(s)? Check. Canon 5D? Check. And… 1 pig head (courtesy of Chef Russell Jackson).. But, of course, check! If ever there was a way to shine a spotlight on regional foods this would be it.

How does it work exactly?

The touring exhibit is currently in residence at the Montalvo Arts Center in Saratoga, California. It was there that I had a chance to watch MAP in action, and interview Andrea about the unique project.

On this (very) sunny day at Montalvo locals were invited to bring local artisan foods and wines. A picnic was held on the expansive grounds featuring fascinating discussion about the various artisan foods. Then–and this is the dramatic part–a remote-controlled octocopter flew overhead (on multiple soirees) and took photos of the scene. These photos (and also videos, as you can see in the Stark Insider TV segment below) will be pinned a la Google Maps, to create an inspiring “tapestry” that both celebrates and informs our culinary history and culture.

Explanations will only get me so far, so the best thing to do would be to watch this Stark Insider TV segment. Andrea Blum describes the MAP project, her inspiration and goals. And photography/aerial wizard Kenny Blum describes the science and tech behind the aerial operation which includes a custom-made Octocopter capable of eight minute flights.