Gary Kremen (Bitcoin), Steve Kirsch (entrepreneur), Bradley Lautenbach (Zuckerberg Media), Brian Solis (Altimeter Group) and Maynard Webb (Yahoo Chairman) are just some of the big names in social media and tech that will take to the stage in Silicon Valley over the coming days.

The four day event is being billed as a technology conference and music festival. So expect an eclectic, intriguing mix of stimulation for both sides of your brain.

Chuck Reed, the Mayor of San Jose, is also scheduled to make an appearance. All told the lineup is impressive, featuring over 80 speakers–from start-ups such as Desti, Pure Matter and Sidecar and from larger players too such as Mozilla, Yahoo and SAP.

“It’s hard to get an audience with a Sand Hill venture capitalist.”

In addition, C2SV organizers have invited some high profile VCs. They will be “locked” into a room for two hours to listen to the ten best startup ideas that were submitted for the challenge. Will they take out their checkbooks? We’ll have to wait and see how this all goes down.

HE RETURNS: THE WILD CARD 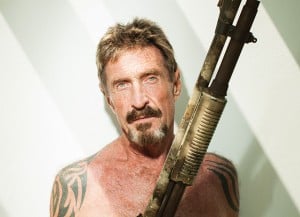 It will be his first public interview since the too-crazy-to-be-true episodes involving guns, faked heart attacks, and dead neighbors played out very publicly earlier this year on social media and McAfee’s blog Who is McAfee.

And wouldn’t you know it, it looks like McAfee wants to get back into the software business. According the San Jose Mercury News he plans to make the Internet “impossible to hack” with some sort of related product announcement at C2SV.

On the music front, more than 70 acts are scheduled to hit the stage at St. James Park for the inaugural event. There’s bound to be something here for everyone. We’ll make a prediction: it will be loud. And it will most certainly be fun. Performers such as Iggy and The Stooges, Thee Oh Sees, Bosnian Rainbows, The Lemonheads, The Coup, Party Ben, The Limousines and many more will certainly make this one to remember. Who said Silicon Valley can’t party?

The 2013 music keynote speaker is James Williamson. He’ll explain how “he went from a makeup-wearing guitarist” with Iggy and the Stooges to a “tie-wearing executive at a big Silicon Valley company” before… retiring and rejoining the band.

The idea behind C2SV comes from Silicon Valley journalist Dan Pulcrano, publisher of three Northern California weeklies, including the well known and loved Metro Silicon Valley. “It’s also an opportunity for the valley’s hard working technical workforce to experience a festival of music and advanced ideas without having to sleep on someone’s couch in another city.”

Stark Insider will be on location during the conference. Look for updates from Clinton Stark. Plus, who knows, maybe even a Stark Insider TV segment or two. Meantime, get some sleep. Get ready. To. Be. Blown. Away.

Staged at the San Jose McEnery Convention Center’s new wing, the C2SV Conference and Expo will feature sessions and keynotes on a provocative range of topics related to music, the creative arts, society and technology.