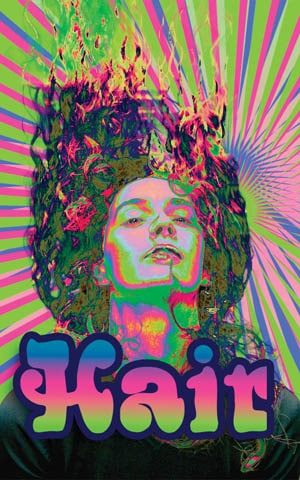 Coastal Rep has announced it will stage Hair this summer.

“It seems hard to imagine that Hair premiered off-Broadway nearly 46 years ago. Since that time versions of the work have played in countries across the world and in so many different tongues.” writes Joe Duffy in the director’s notes.

Hairis about a group of young people in New York City’s East Village who band together as a “Tribe.” They are a New York contingent of flower children, (a freeform phenomenon that had begun a little earlier in Haight-Ashbury, San Francisco and would subsequently spread to Europe & elsewhere). Taking on the feel of an American Indian tribe, they question authority and the society they are living in and the war in Asia. They seek to find a new way. They yearn to change the world. They begin by recreating themselves. They find a potent organic natural aesthetic; the most dramatic visible element, all the men grow their hair long. They tune in to Eastern thought & meditation. They turn on and drop out. They hang out in self-made clouds of incense and grass. They laugh and cavort, as they find a new freedom of expression and camaraderie. They live in crash pads, in the parks and on the streets. Unkempt, wild, free, and deep, they are unique, colorful, something genuinely original and beautiful…and so hip (yet in a different style from the earlier hipsters and beatniks). A new word is coined to identify them. They come to be called hippies. They try to live by the philosophy of “Peace and Love.” They are on a trip of liberation. They commune, join hands in protest and in song. Within the context of the play, they struggle for the light, but are forced to fight & die, only to be reborn, again to suffer more, than to rise from the ashes, to glow, to shine in the Age of Aquarius.

Duffy continues, “It’s also hard to imagine the number of lives that have been created since the show’s inception.  Alternately, I fear the number of lives that have been lost in those 46 years. And although Hair has been perceived as anti-American, controversial or a subversive showing of counter-culture, it has gone on to become a classic in theatre repertoire, worldwide. And at any given time since the 1967 production, a production of Hair is continually somewhere in this, our world. As does the theatre, Haircreates unity and new life, again and again in peaceful tribes worldwide.  This gives me hope and understanding that Hair and it’s once feared or shunned values has become a sustainable resources to all of us.  Hair is the world’s musical. It is Eden for our delight and enlightenment as we pursue our Life, our Liberty and our Happiness. ‘Tune in and Drop out’ with us as we commemorate this great work and as we all celebrate The Troops, The Tribes,  Our Community of Families, the ability to Dream and Love and truly, The Theatre. Orbiting planets never collide, but travel on their own path waiting to align with the others. We can, too. Where have all the flowers gone? They are all still here. Stop and smell the flowers on your path. Pass them on to others.”