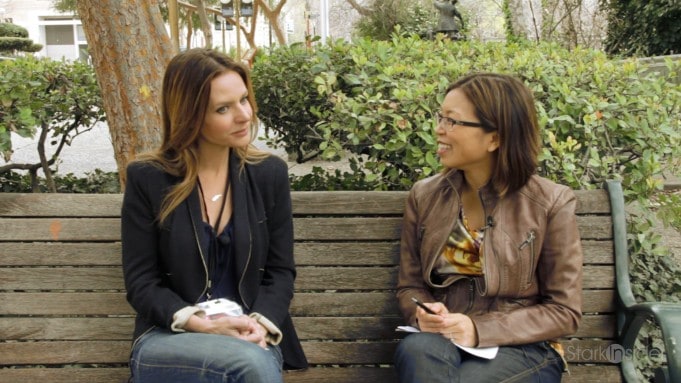 Actress Jessalyn Gilsig (Glee) is in town for the premiere of her new film Somewhere Slow. She stars as an insecure woman on the verge of an emotional breakdown, engulfed by the proverbial mid-life crisis. By chance she meets a wandering free-spirited teenage boy (Graham Martin) on her journey up the East Coast, which sparks an unlikely bond between the two.

I caught up with Jessalyn today at the Cinequest Film Festival in San Jose. We chatted about the picture, her role as producer and the trials and tribulations of raising money, and bringing all the pieces together to get the project to the big screen (hint: food is important).

Also, we talk about Vikings. The new $40 million mini-series on the History Channel aims to debunk the notion that the medieval Norsemen were little more than drunken barbarians who raped and pillaged their way into history.

Of course, it wouldn’t be Stark Insider TV, if we didn’t also chat about food, gadgets and the unexpected. Toast?! And, in a first, Jessalyn turns the tables, and asks me for my favorites.

For now I leave you with these outtakes.

In an impressive career now spanning almost thirty years, Jessalyn has also had roles in the television series Boston Public, NYPD Blue, Prison Break, and Heroes, among others.