Berkeley Repertory Theatre has announced that George Gershwin Alone, a play with music that invites audiences to enjoy an evening with a great composer, is coming to town for a limited engagement.

From the release, “In George Gershwin Alone, the irresistible music of America’s favorite composer comes alive – along with exciting insights into his brief and brilliant life. Hershey Felder brings his hit show to Berkeley Rep after successful runs on Broadway, in London’s West End, and in cities across the country. An accomplished pianist and performer, Felder was given full access to the Gershwin archive to create this tribute to the genius behind Rhapsody in Blue and Porgy and Bess. Gershwin wrote more than 1,000 timeless tunes such as “I Got Rhythm,” “Summertime,” and “They Can’t Take That Away from Me.” See George Gershwin Alone, and be captivated by the man and his music.”

ALSO: Wrapped in Loss: ‘Our Practical Heaven’ at Aurora

Hershey Felder is known for more than 4,000 live performances of his composer plays – Beethoven, As I Knew Him; George Gershwin Alone; Maestro Bernstein; Monsieur Chopin; and now An American Story – on Broadway, in London’s West End, in Europe, and in Asia, as well as at major theatres throughout the United States. 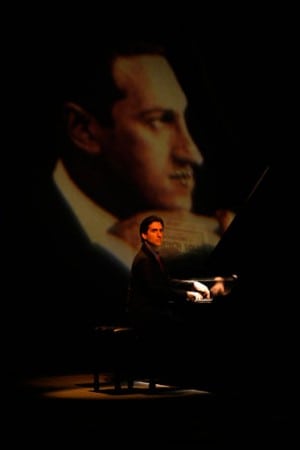 With Hershey Felder as George Gershwin