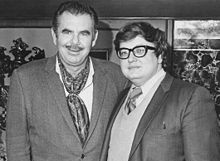 In recognition of his advocacy of independent cinema, film critic Roger Ebert will receive the “Vanguard Leadership Award” from Robert Redford at a benefit in Los Angeles. Ebert has a long-standing relationship with the Sundance Film Festival where he championed films such as Man Push Cart, Come Early Morning, Crumb, Picture Bride, American Movie and The War Zone.

Robert Redford, founder of Sundance Institute, said, “Among the many things I admire about Roger Ebert is how he has long supported freedom of artistic expression. When I started Sundance in 1980, and when few would support us, Roger was there. This was one of the ways he communicated his forward-thinking outlook. He was one of the first to support our artists. His influence and reach is as meaningful as his personal passion for cinema, and he certainly deserves this award.”

Best known for the Chicago Sun-Times film review column (which he has written since 1967), Ebert’s film reviews are syndicated in more than 200 newspapers worldwide. He is the first film critic to win a Pulitzer Prize, as well as the first to be awarded a star on the Hollywood Walk of Fame. Forbes described him as “the most powerful pundit in America.”

In early 2002, Ebert was diagnosed with papillary thyroid cancer, and after a medical leave successfully returned to work in 2007.

Ebert follows in the footsteps of philanthropist and Sundance Institute Trustee George Gund, who was the first to receive the award.