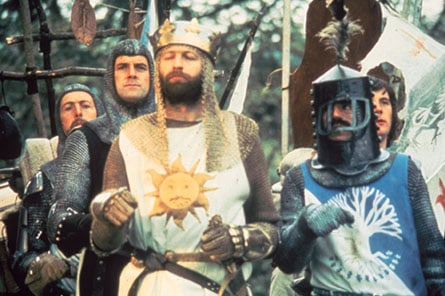 The summer heats up with the return of a cult classic.

Yes! Time to get your funny-bone on with one of every filmgoer’s cult classic comedy favorites. Organizers have announced that Monty Python and the Holy Grail is coming to the Lumiere in San Francisco.

The theatrical screening will be the “best version yet” of the 1975 comedy directed by Terry Gilliam and Terry Jones and features a clearer, sharper image thanks to HD remastering. In addition, the reissue includes the 12 minute never-before-seen short “Terry Gilliam’s Lost Animations.”

From its opening multi-language titles (that sure looks like Swedish) to the closing arrest of the entire Dark Ages cast by modern-day bobbies, Monty Python and the Holy Grail helped to define “irreverence” and became an instant cult classic. This time the Pythonites savage the legend of King Arthur, juxtaposing some excellently selected exterior locations with an unending stream of anachronistic one-liners.

If you’re already a fan of this zany Monty Python send-up of the Middle Ages (and name one person who’s seen it who isn’t), you won’t want to miss the chance to experience the film the way it’s meant to be experienced — on the Big Screen, in a movie theater, with other die-hard fans laughing at the gags (the clippety-clopping coconuts!) and reciting the dialog (“It’s just a flesh wound!”) right alongside.

And to get you in the right frame of mind…

Monty Python and the Holy Grail