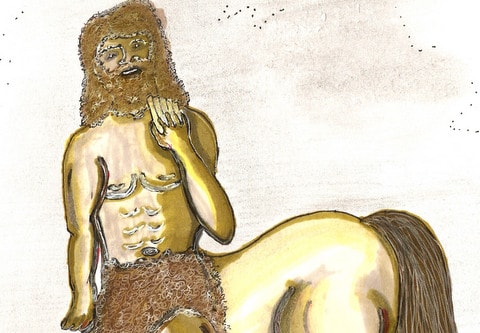 Welcome to another special Stark Insider feature as part of our arts and cultures perspective series. Deniz Hellberg is a playwright and professor of theatre history. Interested in contributing? Write us at info@starkinsider.com.

The Festivals of Lenaia and Dionysia

In the times of ongoing political turbulence and economic austerity in modern Greece, one should perhaps travel 2500 years back in time in order to find inspiration and ideas for handling the current crisis in a more dynamic way. Maybe it is time to stop searching for emergency solutions among Western economists and political institutions and focus on the theatre and cult of the Hellenistic antiquity. The modern Western technocrat of today is hardly a political visionary and the economic solutions provided are highly instable, even flammable. Classical Greek theatre and cult never consider itself solely dealing with entertainment. Instead, it deals with fundamental and eternal ideas, and upholds the spiritual values of society. From a post-modern theatre perspective, drama from antiquity can only offer an understanding of the human psyche and hopefully entertain a little. But in the Western drama, philosophy, the origins of science and democracy seems to have failed to arise in modern times. The festival of Dionysia and Lenaia had a healing and spiritual effect on the whole society and could even serve as a source of inspiration and motivation today.

The origin of Greek theatre sprang from two different festivals which was held every year in Athens in order to honour the god Dionysus. One of these celebrations was called “Lenaia Festival” and was held in January while the other much bigger festival was held at the end of March and was called “Big Dionysia.” At both of these festivals, a so-called dithyramb (dithurambos) was staged, a kind of sacral cantatas that was performed by young men in order to honour the god Dionysus, and it was comprised of dance, music, song and declamation. The music was played on flute in “frygik” tone. The oldest dithyramb known as a literary
construction was written by Arion, 625 – 585 AD. The historian Herodotus writes about Arion that no one could ever play lyre as he does, and that he was the first one to ever compose a dithyramb. The early dithyramb did not demand individuals on stage, but the performer Tespis was the one who changed this dramatic style. He separated one person from the chorus and made him a front storyteller/singer independent of the chorus. Aristotle states that the tragedy did not primarily develop from the xithyramb but from its front storyteller/singer.

The Greeks, as the rest of the world, have to learn to search for universal truths once again, and perhaps find new artistic/spiritual tools for investigation of the (modern) world.

Tepsis invented a role for himself as “hypocrite”, a person who should answer the chorus and the choir leader, and when this invention was first made, drama as we know it today could enter theatre history. Tepsis could hold a dialog or alternate dialog with the chorus, according to tradition. Tepsis also introduced a mask and presented himself as Dionysus. The first time that Tepsis is mentioned in sources was 543 AD. when he won the first poetry price in Athens. Almost two centuries after Tepsis, the city of Athens was absolutely the centre for theatre in the Greek world, and the biggest tragic dramatists competed with other gifted dramatists at the Dionysus festival. Aeschylus (525—456 as), Sophocles (496—406 ad), Euripides (480—406 ad) and the comedy-writer Aristophanes (445—388 ad) made their mark in the Festival of Dionysus. The theatre of Dionysus lay on the south side of Acropolis, where one still can see the ruins and people from all over Greece used to come to the celebrations held in the honour of the god of Dionysus. The celebrations went from five to six days. The first day a grandiose procession was held. The god Dionysus statue was transported from the temple to the theatre venue, and even if the two places were very close to each other, the procession lasted for several hours, since the very first idol of Dionysus was brought to a sacrificial grove called Akademos’ grove (grove of Akademos), where the cult of Dionysus originally had entered Athns. The first celebration day passed with many religious ceremonies and celebrations, and the final procession ended at the theatre of Dionysus, where the idol of Dionysus were placed very close to the orchestra (aka dancing place). There Dionysos retained during the following days of events. All Greece was gathering here in order to participate in the big celebration. Everyone in the city of Athens was free from work and the courts did not hold any trials, it was even forbidden to collect debts. It is stated that even prisoners from the city jails were granted access to the celebrations and dramas. In the following days of the festivals dithyrambic completions were held. Teen chorus participated and each one of them held around fifty members who came from all of the ten tribes of Greece. The last days were devoted to dramatic performances of tragedies, and later comedies were performed. The specific arrangements of the dramatic performances are not exactly known, but it is stated by a passage in Aristophanes’ “The Birds” that if any of the viewers get tired of the choruses and tragedy, he could easily run home and eat and then come back again. And it is assumed that the comedies were performed after the tragedies at the end of the day.

Each of the three selected tragedy writers participated with four separate pieces as three tragedies and one satyr play. If all of the four games were dealing with the same thematic story, the group was used to be called a “tetralogy”. A “tetralogy” example is Aeschylus’ Oresteia, performed in 458 AD. and consisted of Agamemnon, The Libation Bearers and Eumenides. It is the only trilogy which has been preserved except the satyr play Proteus, which is known to be lost. This arrangement with three different tragedies, each of one connected with the other plays thematically, does not go back to Tespis’ time, but can be observed during most of the festivals of the 400th century. The dramatic competition and festivals, which was called “agon,” was led by an “Arkon,” who also picked out three dramatists who would present their plays. Rich citizens were ordered, as a mark of honor, to pay for one performance, which was not a cheap pleasure by any Greek standard, then the chorus was rehearsing months in advance and often had expensive outfit and cloths. These patrons were called “kor-eger” and sponsoring a “kor-egos” was highly honored by the Greek society. During the festivities the individual “kor- eger” was held sacred and therefore dressed in purple cloths and greeted with respect whenever they set foot in the theater. The winning kor- eger´s name were put on victory marble tables, like the modern custom when an opera or theatre sponsor display their name at the opera/theatre venue.

The Chorus in Classical Greek Drama

A special feature in classical Greek theater is the chorus, “ko–ros.” In the 400 th mid-century, a tragic choir consisted of twelve participants, but Sophocles increased the number to fifteen. The comedies on the other hand, contained twenty-four choir members. Aeschylus had introduced “the other actor” while three actors could occur simultaneously on the scene, namely the First and the Second actor, who was called the “Protagonist” and “Deuteragonist” and the Choirmaster. Sophocles went a step further and introduced the third actor, which he called “Tritagonist,” a practice that Aeschylus also applied in his last plays. In many cases, the poets presented themselves as dramatic instructors, and in ancient times they also played the lead role. In order to make the audience more familiar with the writers and actors who would participate in the festival, a ceremony was held a couple of days before, called “Pro-agon”, named after the theatre buildings close to the performing scene. There announced a herald that would occur and presented by the author, “kor- eger” and actors. Interested audiences could thereby obtain a preliminary orientation of the upcoming spectacle.

The Development of the Tragedy Costume

The actors of antiquity was always men – even the female roles – and they acted always with masks. The masks, whose origins were of religious nature, had also the practical advantage that it made it possible for two or three actors to perform with several roles each. The tragedy costume was a blend of historical and contemporary outfit, as in a contemporary Shakespeare performance. It consisted of a tunic, a loose-fitting dress that went from neck to ankles, and sometimes with a short jacket over. The suit was in lively colors and richly decorated. The high “koturnerna,” boots with thick soles, started to be used around 300 AD and the use of the high boots made the actors much taller than they were so they could be better observed from the back rows. But it was the physical movements and the strong voice declamation which was the actor’s most important means of expression, when facial expressions were hidden by the mask as such.

In the modern Greece of today, with austerity and economic despair, the Greeks could reconsider their heritage from antiquity, once more. When the bailout offer from European Union is rejected soon (according to the economist Paul Krugman) inevitably drachmas will be re-instated, loans cannot be paid back, neo Nazi parties will gain more political influence and unemployment among youth will rise to more than 50 percent, the social impact of an ongoing collective nightmare cannot be underestimated. It is tragic show time for sure… or perhaps can something more dynamic and vibrant come out of this?

Why not creating a real (inter)national Dionysus celebrations, (not as a common superficial tourist attraction once again) and invite dramatists and actors from all around the world? Germany and the European Culture funds can pay for the big celebrations for festivals, and competition and an analyzing approach to the Greek drama/trauma of today could find the chance to be alive. When the politicians and economists cannot find any valid solutions to Greece’s various problems (which primarily are structure problems of the society and not of coins and deficit), maybe the stage dramatists can see much clearer. At least they cannot give more useless advises for Greek society. The modern Greeks will also have the opportunity to show once again, that they can re-create the best dramas in the Western tradition. And as Aristotle once put it, the only thing the individual and the society can possess is the knowledge and understanding of the world. The Greeks, as the rest of the world, have to learn to search for universal truths once again, and perhaps find new artistic/spiritual tools for investigation of the (modern) world. Maybe then their completely washed-out word “democracy” could reclaim its meaning – the meaning which was well and alive 2500 years ago. If Greece can do any of this, the rest of the world will benefit once more.

Illustration by Mark Szawlowski. London-born Szawlowski has a professional history of 20 years, during which he has worked as a reporter, editor and illustrator. For several years, Szawlowski has drawn the first and only cartoon strip to appear in Time Out Istanbul in English.