Organizers say the tagline for Frameline36, “Find Your Story,” is a direct action statement inviting you to look through the 104 programs and 217 films in the Festival.

During the 11 days of Frameline36, tens of thousands of people from the Bay Area and all across the globe will come together to see the best of new LGBT cinema with more than 30 countries represented including Iran, Chile, Indonesia, South Africa, and Turkey.

The 36th Festival will open with VITO by Jeffrey Schwarz, an empowering documentary about the inexhaustible gay activist and film author Vito Russo, chronicling his work and influence on the LGBT community. Russo, a film lover and founding member of both GLAAD and ACT UP, is known for his groundbreaking book The Celluloid Closet, which changed LGBT cinema forever.

Following VITO, the worldwide LGBT film community will come together at Temple Night Club for a glittering Opening Night Gala. Film lovers will “mix, mingle, dance and flirt their way through three floors of culinary delights, signature cocktails and effervescent beverages from our Gala Partners.”

The Centerpiece Documentary film at Frameline36 will be Katherine Fairfax Wright and Malika Zouhali-Worrall’s CALL ME KUCHU, a groundbreaking documentary about the LGBT rights movement in Uganda and the activist David Kato. CALL ME KUCHU was a recipient of the Frameline Completion Fund in 2010. The Centerpiece Narrative film is Ira Sachs’s much acclaimed drama, KEEP THE LIGHTS ON, which tells the moving story about the ten-year relationship of a couple living in New York City. Both CALL ME KUCHU and KEEP THE LIGHTS ON were winners of this year’s Teddy Awards for Best Documentary and Best Feature at the Berlin International Film Festival.

The laughs are plenty when straight girl, Jenn, and her gay best friend, Matt, decide to have a baby “the old fashioned way” in Jonathan Lisecki’s irreverent romantic comedy, GAYBY. Iranian female director Negar Azarbayjani’s remarkable first feature, FACING MIRRORS, is also the first Iranian narrative film with a transgender protagonist. In Alexandra-Therese Keining’s KISS ME an uptight, engaged woman quickly falls in love with her free-spirited, future stepsister, and must decide between burying her feelings and losing those who love her. Bavo Defurne’s NORTH SEA TEXAS is a coming-of-age story set along the Belgian coastline in the early 1970s. Pim is a boy unafraid of his predilection for dressing up in women’s clothes, putting on makeup or pining for the handsome, older boy who lives next door.

Macky Alston’s latest documentary, LOVE FREE OR DIE, deftly unwinds the riveting story of Bishop Gene Robinson, the first openly gay, partnered bishop fighting for LGBT inclusion in the Episcopal Church. The Bishop is expected to attend the screening. Homophobia in urban London affects the lives of two best mates—a black lesbian stud and her gay male sidekick—and they are forced to reevaluate everything they know about love and friendship in Campbell X’s STUD LIFE. Brothers Mo and Rashid are growing up in a traditional Egyptian household in a modest London flat in Sally El Hosaini’s MY BROTHER THE DEVIL. As they each confront their different inner demons and phobias, they must learn it is love and understanding that take real courage—before they are torn apart.

Frameline will also showcase films finished with the assistance of the Frameline Completion Fund. In addition to CALL ME KUCHU, GAYBY and VITO is WILDNESS from director Wu Tsang. Exploring the common urban problem of community, visibility and gentrification, the film is a love story between a young, idealistic transplant and the magical bar that takes him in and helps him grow up.

This year’s short programs include the ever-popular FUN IN GIRLS SHORTS, FUN IN BOYS SHORTS, and TRANSTASTIC! programs that feature the funniest and most touching queer short films from all around the world as well as our own backyard with BAY AREA BUFFET.

Speaking of which, Frameline36 has plenty of new works either by local filmmakers or about the Bay Area. A few highlights are Travis Matthew’s I WANT YOUR LOVE, Julie Wyman’s STRONG!, Jack Curtis Dubowsky’s SUBMERGED QUEER SPACES, and Mark Freeman’s TRANSGENDER TUESDAYS: A CLINIC IN THE TENDERLOIN.

The Closing Night film for Frameline36 will be Thom Fitzgerald’s CLOUDBURST, a funny, romantic and moving film starring Oscar winners Olympia Dukakis (Moonstruck) and Brenda Fricker (My Left Foot) as an elder lesbian couple who break free from a nursing home and head to the Canadian border to get married. 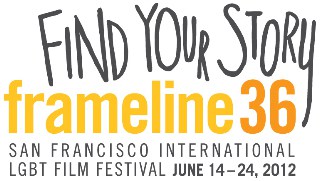