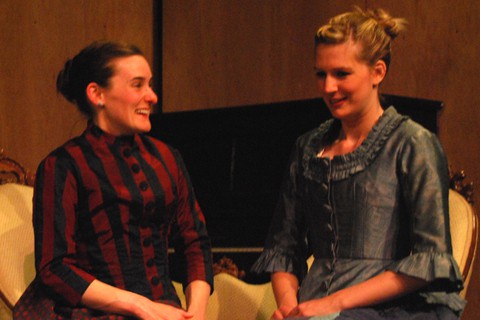 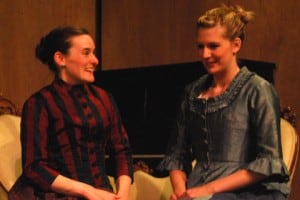 Suffice it to say a pioneering inventor and scientist Dr. Givings, played more debonair than geeky by the talented Jeffrey Bracco, utilizes the new technology by employing experimental “devices” to provide a novel form of therapy to stimulate his depressed – and repressed – patients (see title of play).

His fixation on his work, however, is at the expense of his lonely wife who finds the traditional female role of devoted spouse and motherhood less than satisfying – and would love nothing more than to partake of the new treatment! Elissa Beth Stebbins  (Catherine Givings) evinces a comedic melancholy that is an uncanny display of acting skill.

The rest of the ensemble is equally polished and impressive, among them the beauteous and exceptionally versatile Sarah Moser (as enthusiastic patient Sabrina Daldry suffering from “hysteria”), who’s fresh on the heels of her magnificent turn as “Ophelia” in City Lights’ recent production of “Hamlet.” And company veteran Adam Magill also lights up the stage as the charismatic artiste Leo Irving.

The playwright’s awkward tone is deliberate and may at times shock you, but this production manages to infuse it all with a rare energy and comic aplomb. It’s highly recommended.