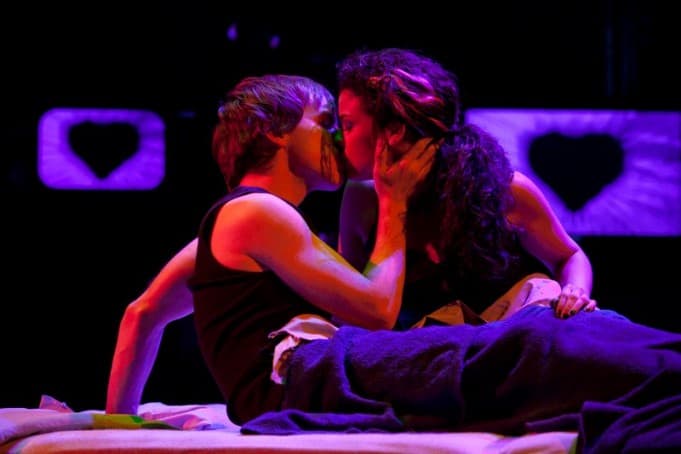 Green Day’s white hot Broadway smash American Idiot, the musical version of their eponymous rock opera, is coming to San Jose. The play was born at the Berkeley Repertory Theatre in 2009 under the direction of Tony Taccone in collaboration with the band.

Also debuting here are Rock of Ages, and the Tony-award winning musical Billy Elliot the Musical. The news came as part of the announcement by Broadway San Jose for their 2012-13 season which kicks off this fall.

Peter Pan and Blue Man Group round out the line-up for the organization’s fourth season in San Jose (see below for the complete schedule).

“We are very proud to be associated with the Center for the Performing Arts on the occasion of its 40th anniversary and honored to be partners in bringing Broadway’s best shows to San Jose. Congratulations on this important milestone and here’s to many more celebrations in the future,” said James L. Nederlander, president of The Nederlander Organization.

A large celebration is expected for the 40th anniversary of the San Jose Center for the Performing Arts, which opened its doors in April of 1972, and will continue to host the productions.

“San Jose deserves quality Broadway musicals and Broadway San Jose, a Nederlander partnership, delivers in the South Bay. San Jose has much to celebrate this year with Broadway San Jose’s fourth season and the 40th Anniversary of the Center for the Performing Arts,” said Bill Sherry, CEO of Team San Jose. “As a cultural venue in the heart of the downtown, the CPA has opened its doors to symphonies, ballets, musicals, and comedies, where our community has cried, laughed, and enjoyed thousands of performances.”

From the underground dance clubs of 1950s Memphis, Tennessee, comes a hot new Broadway musical that bursts off the stage with explosive dancing, irresistible songs and a thrilling tale of fame and forbidden love. Inspired by actual events, MEMPHIS is about a white radio DJ who wants to change the world and a black club singer who is ready for her big break. Come along on their incredible journey to the ends of the airwaves — filled with laughter, soaring emotion and roof-raising rock ‘n’ roll. Winner of four 2010 Tony Awards including Best Musical, MEMPHIS features a Tony-winning book by Joe DiPietro (I Love You, You’re Perfect, Now Change) and a Tony-winning original score with music by Bon Jovi founding member David Bryan. Directing is Tony nominee Christopher Ashley (Xanadu), and choreography is by Sergio Trujillo (Jersey Boys).

The worldwide party musical ROCK OF AGES features a mix of 28 rockin’ 80’s tunes including DON’T STOP BELIEVIN’, WE BUILT THIS CITY, THE FINAL COUNTDOWN, WANTED DEAD OR ALIVE, HERE I GO AGAIN, CAN’T FIGHT THIS FEELING and I WANT TO KNOW WHAT LOVE IS. In 1987 on the Sunset Strip, a small town girl met a big city rocker and in LA’s most famous rock club, they fell in love to the greatest songs of the 80’s.

BLUE MAN GROUP is best known for their wildly popular theatrical shows and concerts which combine comedy, music, and technology to produce a totally unique form of entertainment.

BILLY ELLIOT THE MUSICAL is the joyous celebration of one boy’s journey to make his dreams come true. Set in a small town, the story follows Billy as he stumbles out of the boxing ring and into a ballet class, discovering a surprising talent that inspires his family and his whole community and changes his life forever. A big musical with an even bigger heart, BILLY ELLIOT will enchant the dreamer in all of us. Director Stephen Daldry, choreographer Peter Darling and writer Lee Hall.

Direct from Broadway, the smash-hit musical AMERICAN IDIOT tells the story of three lifelong friends, forced to choose between their dreams and the safety of suburbia. Based on Green Day’s Grammy Award-winning multi-platinum album and featuring the hits “Boulevard of Broken Dreams,” “21 Guns,” “Wake Me Up When September Ends,” “Holiday” and the blockbuster title track, AMERICAN IDIOT boldly takes the American musical where it’s never gone before. Direction by Michael Mayer (Spring Awakening), choreography by Steven Hoggett (Black Watch) and orchestrations and arrangements by Tom Kitt (Next to Normal).