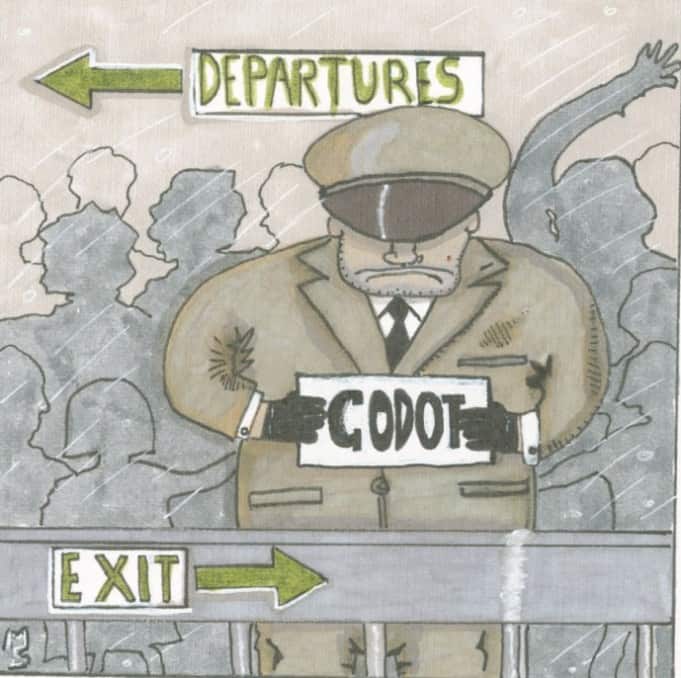 This is a special Stark Insider feature as part of our arts and cultures perspective series. Interested in contributing? Write SI at info@starkinsider.com.

In a global time of waiting…waiting for the US to withdraw from Afghanistan, for the European Union to handle the economic recession, for Greece and Italy to handle their budget deficit, for global economy to recover and unemployment to decline, one modern playwright could accompany us while we wait: Samuel Beckett, surely it is. Beckett’s modern absurdist theater may be described as unrealistic in the sense that his characters are distinctly remote from naturalistic reality, turned away from any realistic environment and the psychological toing and froing between individuals. This suspension of reality or psychological normality manifests itself as a denial by the powerless and the outcast of the insurmountable reality that envelopes them, and gives room for a new theatrical experience — a dramatic reality that is a kind of purified theater which develops under its own laws and gravitation, and the dramatic effect increases as the naturalistic reality declines. The distance that Brecht uses between his text and the actors (primarily for ideological and aesthetic reasons) exists in Beckett’s drama only between the figures and reality as such. On one hand, the distance that Beckett uses is relevant to them as dramatic characters. On the other hand, the conversation lines almost display a Chekhovian realism. The main characteristic of Beckett’s figures and their relation to human existence as such is their time-consciousness, which is concatenated with their ability to remember, or rather, not to remember at all, which in turn is dependent of what is happening around them: Scamp Estragon in Waiting for Godot says that he either forgets immediately, or remembers everything forever. The sequence of events in Beckett is limited to an absolute minimum. Vladimir and Estragon wait day in and day out for Godot without much variety. Waiting is all around the place in Beckett’s plays. In the Fin de Partie (Endgame, ed. Paris 1957) the last two people wait for everything to end imminently. Old Kräpp in Krapp’s Last Tape (Krapp’s Last Band, London 1959) waits while he is playing his recorded past and commenting on it. Winnie in Happy Days is also waiting, buried up to the neck but in fine spirits. The characters that populate Beckett’s work essentially wait without hope, but in each case they do wait nonetheless. Life goes on, and in waiting they figure out something else — principally, the meaning, or lack of it of their own existence. One waits, therefore one truly exists!

Beckett’s drama constantly varies between expression and desire. It is a variance which is beyond language and an attempt to find the truth of the unspoken reality behind the spoken words.

But in such a reality where no events occur, including the past ones that took place a long time ago, there is actually nothing to remember. And without memory, the sense of time is truly lost. For just as the physical room only upholds an objective reality, the materialistic order of objects that we hold could only be as true as physical objects. Time, on the other hand (and waiting), does not own independent existence beyond the order of events that Beckett’s protagonists are bound to follow as powerless humans.

The lack of identity between word and reality. The language processing in Beckett’s drama rests on a painful understanding of the inadequacy of words and the lack of identity between human words and the felt reality. Beckett’s drama constantly varies between expression and desire. It is a variance which is beyond language and an attempt to find the truth of the unspoken reality behind the spoken words. By pulling it out and making it scenically visible, he achieves a relationship between dialogue and movement, which in the end becomes a visible and audible dramatic expression of contradictory existence marked by utter nonsense. 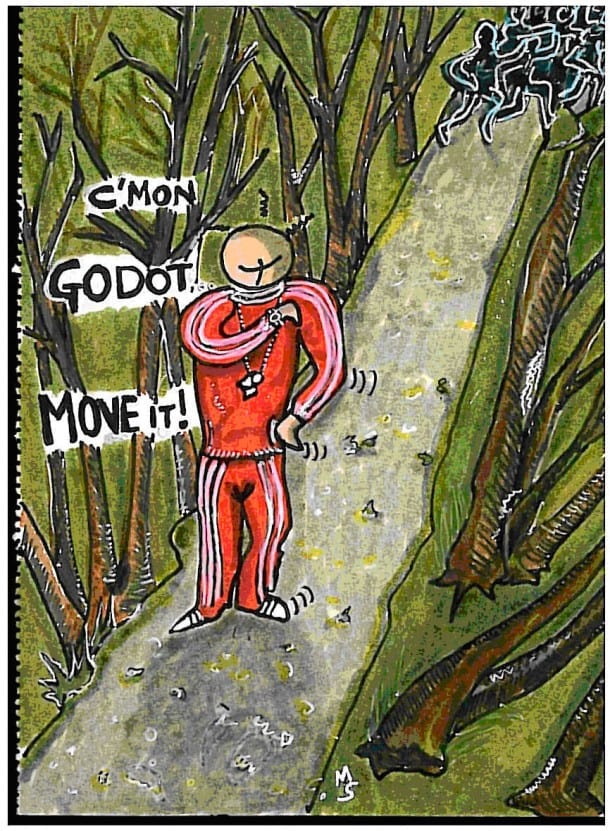 Here too, the directing instruction is also an important component, and the works themselves are quite precisely worded displays of Beckett’s ambition for pure mimesis. Futility and meaninglessness also have their own structure; it is a dramatic layer in which regularity is over its own impotence, the act of waiting becomes a ludicrous device whose participants aspire to have a grasp of some fixed points in reality. After all, the characters want everything to be in proper order, around and inside themselves. “I love the order,” says Clov in Endgame. “It is my dream. A world where everything would be quiet and still, and all the contents in last place in the final dust.” The destructive humour in the game is particularly vital and active with ‘coarse antics, circus fun, gags, duels with words after the best music hall design in the middle of total despair’. Thus, the absurd triangle marks its trajectory from comedy to farce, and ultimately to tragedy. All is expressed with utmost brevity and stringency:

Vagabonds Estragon and Vladimir discusses Godot while they wait:

Beckett himself responded to why he used so many words by saying that he was yet to be convinced that language was a workable agent for communication. As he put it: “What do you want to do? The words, There’s nothing else left.`

Or “like the solitary child who turns himself into children, two, three, so as to be together, and whisper together, in the dark.” (Endgame).

Language becomes another character on stage, the last link in an utterly meaningless existence, which keeps them alive by speaking, ‘They talk about their lives.’

And as Estragon and Vladimir goes on waiting, most of us wait alongside them, for better times, for global conflict to end, for economic prosperity, for a more clear reality to enter the stage –a reality that will likely miss the performance in the fractured theatre and global economic reality of 2012.

Deniz HELLBERG is a playwright and professor of theatre history.

Illustration by Mark Szawlowski. London-born Szawlowski has a professional history of 20 years, during which he has worked as a reporter, editor and illustrator. For several years, Szawlowski has drawn the first and only cartoon strip to appear in Time Out Istanbul in English.