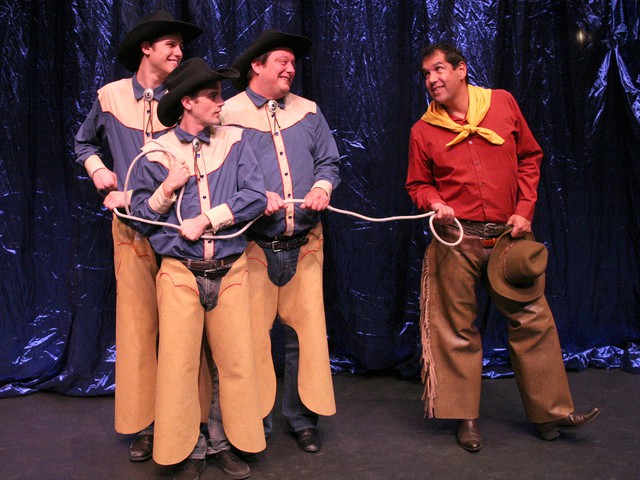 The Will Rogers Follies

Will Rogers is probably not a name that first comes to mind when considering the great entertainers of the 20th century. The fact is, however, during the 1920s and ’30s he was an international phenomenon. He achieved initial success traveling the globe as a rope-trick vaudevillian. His “Wild West”-themed show then went on to Broadway, adapted as part of the famous Ziegfeld Follies. Thereafter, he achieved even greater fame and fortune with a career in Hollywood where he made over seventy films.

He was also a hugely popular humorist and social commentator, with his own radio show and nationally syndicated column. At the zenith of his notoriety he met his untimely death in an airplane crash in 1935 at the age of 55. His passing was mourned worldwide.

The Will Rogers Follies is the multiple Tony Award-winning musical revue from 1991 featuring the life and times of this enormous celebrity, done in the form of a fantastical Florenz Ziegfeld, Jr. extravaganza. As such, the narrative is at best superficial; serving primarily as an excuse to showcase pretty chorus girls in sexy, flamboyant costumes, lavish sets, spectacular dance routines, and catchy songs. And although at times the pageantry seems a bit excessive, this extraordinarily ambitious amateur theatre production and its huge cast deliver the goods.

Scenic designer R. Dutch Fritz has outdone himself, essentially converting the thrust stage venue into a more traditional proscenium theatre, which better suits this type of show. His elaborate set, with exquisite lighting by Don Coluzzi, features a lariat-themed arch, and utilizes a scrim curtain and projected imagery that came off without a hitch.

But the piece de resistance is a massive, multi-tiered staircase, with each step colorfully illuminated from underneath. It’s placed center stage and climbs virtually to the ceiling in grand Ziegfeld fashion – bravo!

Alex Perez, as Will Rogers, leads the large troupe with an insouciant, country-boy manner and a melodious singing voice that fit the role and help bring the often over-the-top proceedings back to reality during frequent interludes. And he knows how to handle a lasso, too!

Perez is obliged to regularly break the fourth wall, confidently addressing the audience in between set pieces with a friendly political banter reminiscent of monologues given by the hosts of contemporary late-night television. Although the play covers major past events throughout his life, his character is set firmly in the present, looking in retrospect as he re-enacts each pivotal, albeit mostly humorous, moment.

The most dramatic sequence comes in the second act, where the follies are forced to close due to the onset of the Great Depression and Rogers is asked to give a radio speech to the nation. It’s surprisingly affecting, resonating with an immediacy that is no doubt tied to the current economic malaise. And his closing rendition of “Never Met a Man I Didn’t Like” is also quite poignant.

His exchanges with his wife, Betty Blake (effortlessly done by Corrie Lenn Borris), are nicely performed, but the material is purposely underplayed and doesn’t adequately explore their relationship or her displeasure with “the show business” and his endless tours on the road.

Ms. Borris is given ample opportunity to show off her dulcet tones, however, including the torch ballad “No Man Left for Me” (sung in a sultry gown seated atop an upright piano). And perhaps her best acting scene is the one immediately preceding her heartfelt “My Big Mistake,” in which she engages in a witty repartee with “Ziegfeld’s Favorite” girl, smartly played with a wink and smile – and undeniable sex appeal – by Rachelle Jones.

Besides the captivating  presence of Ms. Jones, the other frequent scene-stealer is the redoubtable Todd Wright, as Will’s father, Clem Rogers. His character’s interplay with Rogers is priceless, and he brings an ebullience and rare comic-timing to the role that are truly infectious. And he knows how to belt out a tune with his delightful “It’s a Boy” and “Will-a-mania” reprise.

The rest of the company are first-rate, with honorable mention going to the sextet/Ziegfeld girls (Adrienne Tiffany Herro, Karen Althoff, Gabrielle Au, Anastasia Bonaccorso, Alyson Chilton, Katherine Leyva, Molly Murphy, Shannon Sullivan) whose graceful moves and leggy pulchritude do justice to the fabulous choreography of Dottie Lester-White and costumer Shannon Maxham. Their “Campaign-Our Favorite Son” number (among many) is brilliantly staged and executed – a genuine showstopper!

Although the first act doesn’t quite have the burnish of the second, the intricate staging by director Jay Manley is overall well-conceived and quite entertaining. And the live orchestra, under the direction of Greg Sudmeier, takes full advantage of the fine Cy Coleman score. It’s most certainly worth a trip to Foster City!

The Will Rogers Follies