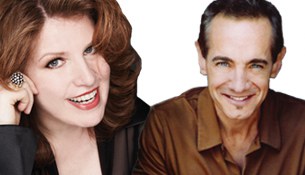 42nd Street Moon has lined up two major guest stars, Klea Blackhurst and Jason Graae, to head the cast for the upcoming 80th Birthday salute to beloved Tony-winning Broadway composer/lyricist, Jerry Herman titled The Best of Times. The Jerry Herman Salon will be presented at the Alcazar Theatre for one night only, Thursday, January 26 at 7 pm. It will be hosted by 42nd Street Moon Artistic Director Greg MacKellan, and will also feature Moon performers Debbie De Coudreaux, Tyler McKenna, Sharon Rietkerk and Kelly Sanchez.

Jerry Herman turned 80 on July 13 of this year. His shows lit up Broadway through the 1960s, 70s, 80s and into the 90s. “Through the Bottom of the Glass,” a little known song from Dear World, typifies the Jerry Herman worldview: you just have to know where to aim your gaze, and life as it should be reveals itself. “Open a New Window,” “Hello, Dolly!” “It Only Takes a Moment,” “Mame,” “Before the Parade Passes By,” “It’s Today!,” “Milk and Honey,” “Shalom,” “Time Heals Everything,” “I’ll Be Here Tomorrow,” “I Am What I Am” – these great songs and more will radiate from the Alcazar stage for one special evening.

“We’ve done two of Jerry Herman’s musicals – Mack & Mabel and Dear World – and we’re so glad to be able to salute this wonderful man with a whole evening of his songs,” said MacKellan. “Of course, we’ll cover his great standards, but look for some surprises as well.”

Klea Blackhurst has appeared in 42nd Street Moon’s shows regularly since 2005, starring in the Moon’s productions of Call Me Madam and Red Hot and Blue prior to appearing in her own acclaimed one-woman tribute to Ethel Merman, Everything The Traffic Will Allow in April of last year. She has performed with symphonies and in theatrical productions across the country and abroad. Her concert appearances include the London Palladium presentation of Jerry Herman’s Broadway with Angela Lansbury, the Atlanta Symphony Orchestra, Jazz at Lincoln Center, Carnegie Hall with Michael Feinstein in celebration of composer Jule Styne and the BBC Proms concert telecast of Oklahoma! from London’s Royal Albert Hall. She currently plays Shelby Cross, on IFC’s comedy series, ” Onion News Network.”

Jason Graae appears for the first time with the company. His Broadway credits include A Grand Night For Singing, Falsettos, Stardust, Snoopy! and Do Black Patent Leather Shows Really Reflect Up? Off-Broadway he appeared in Forever Plaid, Olympus on My Mind, All in the Timing, Hello Muddah, Hello Fadduh (Drama Desk Nomination Best Actor in a Musical) and others. He has performed his one-man show all over the country, including Rainbow and Stars, Birdland, and the Metropolitan Room in NYC, Wolf Trap, Feinstein’s in L.A., the Fairmont Hotels in New Orleans and Dallas, and The Plush Room and Rrazz Room in San Francisco, to name a few. He toured the U.S. with Jerry Herman in Hello, Jerry! On PBS, he was a guest soloist twice with the Boston Pops and once with Marvin Hamlisch and the National Symphony on “Holiday for the Troops at The Kennedy Center” and in “Words and Music by Jerry Herman.” His forty CD recordings include original cast albums, concerts, compilations (including three produced by Greg MacKellan), and three solo CDs, including “Perfect Hermony – Jason Graae sings Jerry Herman.” His accolades include the New York Nightlife Award, and four Bistros.

MacKellan will direct The Best of Times. Dave Dobrusky serves as Musical Director, with the narrative written by Joe Mader.

THE BEST OF TIMES, The Jerry Herman Salon