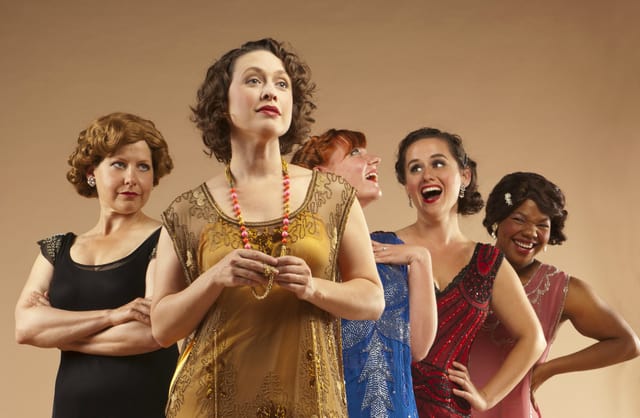 The “Roaring Twenties” was a dynamic period in U.S. history. Despite the shortsighted imposition of Prohibition, or maybe in reaction to it, the nation embraced a new cultural “modernity” and relaxing of social mores. Among other things, the illicit “cocktail party” became a mainstay of high society.

The musical comedy, Oh, Kay!, which made its Broadway debut in 1926, is a perfect distillation of the spirit and mood of that time. And perhaps the most apt, figurative description one can give this delightful production would be that it makes one feel as if one has been invited to a fantastical, wonderfully entertaining cocktail party!

The plot involves a small band of bootleggers, including a Brit known as the “Duke of Durham,” his sister Kay, and their two American sidekicks Larry Potter and “Shorty” McGee. They take over a Long Island estate to temporarily store their contraband during the absence of its wealthy owner, Jimmy Winter. Suffice it to say the antics and inevitable romance that commence upon his return successfully combine classic farcical elements and a score by the inimitable George and Ira Gershwin for ultimate comedic effect.

The minimalist and mostly static set design is something of a disappointment and a lost opportunity, failing to adequately capitalize on the exquisite art deco style prevalent in the ‘20s. As such, one must rely upon fully realized characterizations, jazz-tinged orchestrations and costuming to get a true sense of the era. Thankfully, in that regard, the show is a resounding success.

Donning fabulous flapper gowns, makeup and bobs by costumer Stephanie Finander, they set the merry, light-hearted tone of the play. Collectively they exhibit brisk comic timing and an unwavering commitment to their admittedly obtuse but disarmingly sweet characters that makes them undeniably hilarious and irresistible to watch.

Their opening number, “The Woman’s Touch,” adroitly performed by all concerned, features the use of props and some elaborate staging (courtesy of director Maureen McVerry) that they execute without a hitch.  Bravo!

As leading man Jimmy Winter, Tyler McKenna provides matinee idol looks and a fine crooner’s voice that fit the role. His pairing with the elegant beauty and natural comedienne, Teressa Byrne as Kay, is a casting coup and their chemistry is unmistakable.

In stark contrast to McKenna’s pop vocalizations, however, Ms. Byrne is a coloratura soprano with a distinct vibrato of a type more commonly heard in grand opera. And yet, surprisingly, the two very different techniques complement one another quite effectively. Their marvelous duet of “Do, Do, Do,” as a case in point, comes off particularly well.

And Ms. Byrne’s solo interpretation of the sublime “Someone to Watch Over Me” is also nicely done. Conceivably it’s the composer’s classical and jazz underpinnings that allow his music to accommodate and do justice to any singing form.

Wilde has a chance to show off his tap-dancing moves, along with the equally talented all girl ensemble, in his rendition of “Fidgety Feet” (typical of the uniformly splendid choreography by Staci Arriaga); and Sharber, whose delivery of many priceless one-liners displays a superb comic acumen, leads the entire cast in a rousing “Clap Yo’ Hands” which was the show-stopping highlight of the evening.

And recognition must go to the yeoman job by pianist and musical director Brandon Adams and the redoubtable reedman Nick Di Scala. Once again they made one forget that Gershwin’s rich compositions were meant for a full orchestra.

Following on the heels of a season opening misstep, 42nd Street Moon is back on track. Bravo!