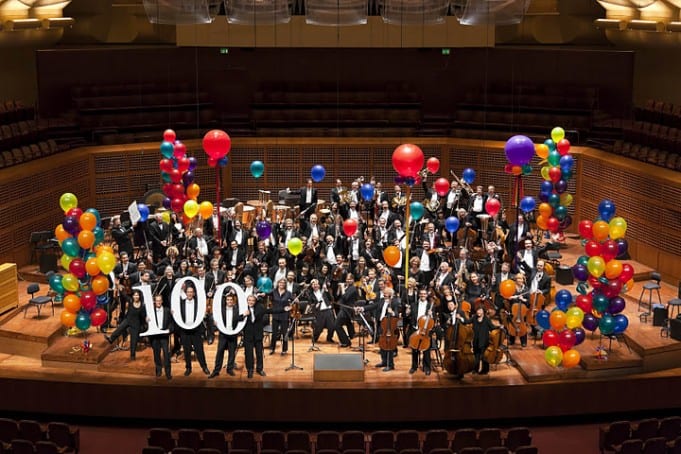 On Friday, December 8, 1911 at 3:15 p.m., at San Francisco’s Cort Theater, American conductor Henry Hadley picked up his baton to lead the newly formed San Francisco Orchestra in its first ever concert. And when the first notes of Wagner’s Prelude to Act I of Die Meistersinger von Nürnberg were played to a sold-out house of 1,400 people, a new era in San Francisco’s cultural life began.

Although its extensive Centennial Season celebration has been well underway since September, Thursday, December 8 has special resonance for the San Francisco Symphony, being the actual date of that very first concert 100 years ago. In addition to the Wagner prelude, the inaugural concert featured Tchaikovsky’s Symphony No. 6, Haydn’s Theme and Variations from the Emperor Quartet, and Liszt’s Les Preludes. The San Francisco Chronicle’s Harvey Wickham reported that the audience, described as “one of the most fashionable to ever attend a matinee,” responded enthusiastically with “applause, hand-clapping and thunderous cheers.” San Francisco, he concluded, “has had a great symphony orchestra lying around loose for a long time without knowing it.”

The formation of a professional orchestra for the city was part of San Francisco’s bold rebirth following the devastation of the 1906 earthquake. It was a community-driven project, and some of the Orchestra’s very first concerts were dedicated to working people and kids. Throughout the next century, the Symphony has continued to reflect and complement the community it serves. With that community support, it has grown into an internationally-acclaimed orchestra with a year-round performance schedule at Davies Symphony Hall, national and international tours, and a music education program in the public schools unequalled by any other American orchestra. In addition to its rich history of live performances, the San Francisco Symphony has a robust recorded legacy that dates almost to its 1911 inception.

The Symphony’s 100 years of accomplishments are the focus of a variety of television, editorial, recording, and multimedia projects created to mark the anniversary, including a new one-hour documentary about the Symphony to be broadcast on NBC Bay Area in December. In addition, the Symphony’s Centennial Season Opening Gala will be broadcast nationwide on THIRTEEN’S Great Performances in spring 2012. The national PBS Gala broadcast will be followed by a DVD release of the Gala performance paired with the documentary about the Symphony’s colorful past. Also, a new 12-part audio series on the history of the SF Symphony and its recordings, curated and hosted by musicologist Scott Foglesong, will be available from the SF Symphony website starting in its 100th birthday week, on December 6. These podcasts feature excerpts from SF Symphony archival recordings that have been long out of print or exist only in now-antiquated formats. An extensive interactive historical timeline with images, text and video clips from the documentary tells the Symphony’s story at… A book, “Music For A City, Music For the World” by Larry Rothe, was released in September.

A diverse variety of celebratory events and concerts continue throughout the Centennial season, through summer 2012. One of the cornerstone celebrations is the reprisal of the groundbreaking American Mavericks Festival in San Francisco March 10-18 at Davies Symphony Hall. Music Director Michael Tilson Thomas and the SF Symphony will then take the Centennial celebration on the road, with American Mavericks concerts in Chicago, Ann Arbor and Carnegie Hall throughout March. The American Orchestra Series, which brought the Los Angeles Philharmonic and Gustavo Dudamel to Davies Symphony Hall in November, continues with concerts by the Boston Symphony Orchestra, the Chicago Symphony Orchestra, the Cleveland Orchestra, the New York Philharmonic and the Philadelphia Orchestra. In May 2012, Tilson Thomas and the Orchestra delve into the rich history of California music, with Barbary Coast and Beyond concerts at Davies Symphony Hall.