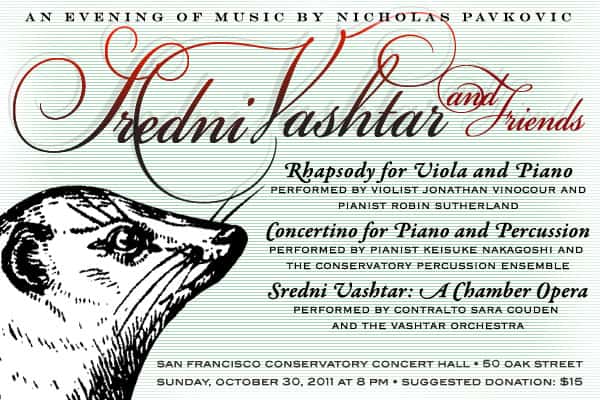 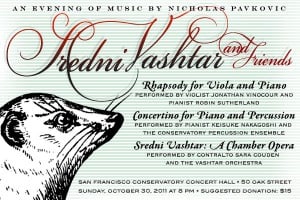 Musicians from the San Francisco Conservatory and the San Francisco Symphony will present works by Nicholas Pavkovic on Sunday, October 30 at 8 pm in the Conservatory’s Concert Hall. The program will include the chamber opera Sredni Vashtar and the premiere of Rhapsody for Viola and Piano, performed by Jonathan Vinocour and Robin Sutherland. The 2008 winning entry in the Percussive Arts Society composition competition, Concertino for Piano and Percussion, will be performed by pianist Keisuke Nakagoshi and team of six percussionists.

Scored for sixteen instrumentalists and a single singer, Sredni Vashtar is based on the short story of the same name by Saki (1870-1916). The libretto, by Jim Coughenour, asks the singer to take on multiple roles in the drama; she is, variously, the young protagonist, his guardian, the narrator of the story and the diva who is singing it. The accompanying ensemble consists of single strings, winds and brass, a battery of percussion manned by three percussionists and a keyboardist who plays harpsichord, celesta and reed organ. Sredni Vashtar premiered to great acclaim at the 2010 Hot Air Festival. Wolfgang Thompson provided stage direction for both the original and the current productions.

The Concertino for Piano and Percussion was written for the Percussive Arts Society composition competition in 2008. The work, however, went through a series of revisions in the following two years. It was premiered by the composer in December 2010 after a lengthy collaboration with the Percussion Department of the Conservatory. The one-movement work reflects upon a variety of 20th-century piano styles, recalling both the bluster of early modernist piano concerti and the energy of modern jazz. Keisuke Nakagoshi will will improvise his own cadenza for this performance.

Alternately extroverted and introverted, the Rhapsody for Viola and Piano requires two players with strong virtuosic and lyrical skills. Listeners may hear the influence of Latin music in this work: The viola and piano challenge one another in an agitated opener that hints at the affect of Tango, if not its musical language. The second theme is spare and dream-like, swaying — in mixed meters — over a kind of disembodied Samba rhythm. The instruments spar again as the original material is developed, but after a distant and improvisatory reconciliation of the two themes, unexpected new material arrives: a wistful barcarolle. The ending is fire and smoke. Rising tensions culminate in a plummeting arabesque; the final exclamation point is provided by the piano.

This program will also include Contraption No. 1 for player piano and Eight Figments for Wind Quintet.

Nicholas Pavkovic studied with Elinor Armer at the San Francisco Conservatory of Music, where he received a Master of Music degree in 2011. Prior to his work at the Conservatory, Pavkovic he completed the film scoring program at UCLA and contributed music to two dozen independent features and shorts. In 2008, he was chosen as a Sundance Composers Lab fellow. Other honors include the first prize in the Percussive Arts Society composition competition in 2008 and the Conservatory’s Highsmith Award in 2011. His music can be heard at www.pavkovic.com.