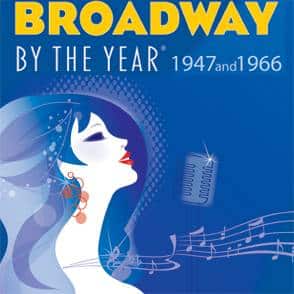 Broadway By The Bay announced today that it will close its 46th season with Broadway by the Year, a musical and historical snapshot of the Great White Way – for six performances only – running November 17 through 20, 2011 at the Fox Theatre

Broadway by the Year takes audiences of all ages on a musical tour of the Great White Way, highlighting the years of 1947 and 1966. The limited engagement will feature Broadway stars performing songs from Brigadoon, Finian’s Rainbow, Cabaret, Mame, I Do! I Do!, Sweet Charity and more.

Created/Written/Hosted by Scott Siegel and produced by special arrangement with the Town Hall in New York, the show celebrates the most memorable songs (and some lesser-known gems) from Broadway shows of these selected years.

The cast  includes Jeffry Denman, who starred in both the World Premiere San Francisco production and original Broadway production of Irving Berlin’s White Christmas, as well as The Producers and How To Succeed In Business. He regularly directs and choreographs Broadway By The Year shows at Town Hall in New York. Also in the cast are Ron Bohmer (Les Miserables, The Scarlet Pimpernel, Fiddler on the Roof, A Little Night Music, Woman in White and Ragtime), and Christina Bianco (Forbidden Broadway, Newsical).

Scott Siegel will serve as the narrator.

Broadway by the Year