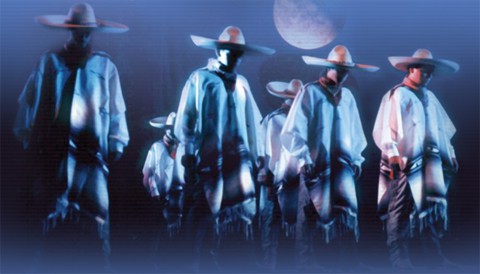 ¡VivaFest!, the 20th anniversary of the San José Mexican Heritage & Mariachi Festival, announced today an expansion of its new media activities with CreaTV and The Tech Museum.

The Festival’s 2010 original mariachi musical will be aired in a special broadest in its entirety to celebrate Hispanic Heritage Month on CreaTv Thursday, September 22 and Sunday September 25 at 8:30 pm on Silicon Valley Channel 30. It will continue to run every Thursday and Sunday at those times through the month of October.

“The Harvest,” produced by Eva Longoria, was honored at this week’s ALMA awards as the Most Outstanding Special. One of the producers, David Damian Figeroa, will join Albie Hecht on Saturday, September 24 for the Question and Answer session immediately following the film.

MEXICO (An IMAX Film)
September 19th, 2011 — 7:00 pm
Using text from Mexican novelist Carlos Fuentes and ancient Aztec and Mayan poetry, narrator Martin Sheen leads viewers on a visual journey through Mexico’s rich and varied past and present. Stunning giant screen images and a dramatic musical score by Daniel Valdez create a vivid and insightful portrait of the Mexican people and her culture. From the tumultuous crowds at the Annual Independence Day celebration in Mexico City the audience is transported back three millennia to the ancient Olmec, Toltec, Zapotec, Totanac, Aztec and Maya civilizations – the roots of Mexican culture.

When Worlds Collide Documentary
September 20th, 2011 — 7:00 pm
“When Worlds Collide – The Untold Story of Our Culture” followed by a Q&A with Ruben Martinez, the screenwriter of the film
In 1492, two worlds that for thousands of years had developed completely independent of one another suddenly came into contact. In the following decades, those two worlds painfully and haltingly began to merge. When Worlds Collide examines power, religion, wealth, and the nature of identity and ethnicity in the Americas right up to our own times.

Danza Folklórica Escénica
September 21st, 2011 — 7:00 pm
“Danza Folklórica Escénica: El Sello Artístico de Rafael Zamarripa” (Mexican Folkloric Dance: Rafael Zamarripa’s Artistic Trademark) followed by a Q&A with the filmmakers, Olga Nájera-Ramírez, Professor of Anthropology UC Santa Cruz and Russell Rodiguez, PhD
MEXICAN FOLKLORIC DANCE tells the story of the vibrant art form through the life and work of the internationally acclaimed artist and choreographer, Rafael Zamarripa. A former member of the Ballet Folklórico de Mexico, Zamarripa is an innovator who has kept the art form alive among young people, founding and inspiring dance companies in Mexico and the US. Mexican folkloric dance is a stylized, choreographed art form designed to display the cultural diversity of Mexico with energy, heart, and intricate technique. Rooted in the post-revolutionary period, folkloric dance blossomed in the 1960s and has become a thriving phenomenon in Mexico and the United States, and is performed all over the world. This documentary traces its development through the experiences and artistic productions of Rafael Zamarripa and the dancers he has influenced.

At the End of the Day
September 22nd, 2011 — 7:00 pm
Directed by Dionisio Ceballos
Written by Dionisio Ceballos & Stephen W. Brown
Marte is desperate for work. He’s lost in a city where he can neither speak the language nor find his family. Whether by chance or fate, he wanders by the house of Fred Borders – where rose bushes sit in the hot morning sun, waiting for someone to plant them. Marte gets to work…
Fred is recently retired and about to begin an exercise program. But first he decides to have some waffles and bacon. When he opens his mouth for that first bite, he glances out the window and beholds Marte…
Fred rushes outside. An initial attempt at communication fails completely. Fred calls his wife Pam at the elementary school where she works. She enlists the Spanish teacher Dolores to translate. And a deal is seemingly struck between Fred and Marte. Periodically Fred checks on Marte’s progress, fascinated by the way the stranger goes about his work. Fred even picks up a fast-food lunch for Marte similar to his own. After a mid-afternoon siesta, Fred awakens to find the roses all planted. Marte has vanished — leaving behind both his hat and his payment. Fred cruises the neighborhood. No Marte. He drives further, searching frantically. He asks strangers if they’ve seen this man he tries to describe. Fred even ventures into a Latino store… Finally, just as the sun is going down and Fred is about to give up the search… He spots Marte near the railroad tracks. Can the two men at last communicate and settle accounts?

The Harvest
September 24th, 2011 — 7:00 pm
Eva Longoria’s documentary “The Harvest” and Key Note remarks with White House Deputy Director for Excellence in Hispanic Education, Jose Rico, with filmmaker Q&A afterword. “The Harvest” recently won an Alma Award.
THE HARVEST/LA COSECHA is the story of the children who work as many as 12 hours a day, six months a year in the scorching hot sun, without the protection of child labor laws. These children are not toiling in the fields in some far away land. They are working here, in our back yard, in America.
Not since the work of Walker Evans, has the world of these agricultural workers been so vividly and intimately depicted. More than 400,000 migrant child workers in the US journey from their homes traveling from state to state, farm to farm, crop to crop, picking the produce we all eat. Many of these children are American citizens. All are working to help their families survive while sacrificing the birthright of childhood: play; stability; school. The film profiles three of them as they work through the 2009 harvest. Whose families will be “lucky” enough to get work? Which families will be separated? Which will be deported or injured or killed? Will any manage to keep their dreams alive?
The Hackworth IMAX Dome Theater is located at The Tech Museum, 201 South Market Street, San José, CA.