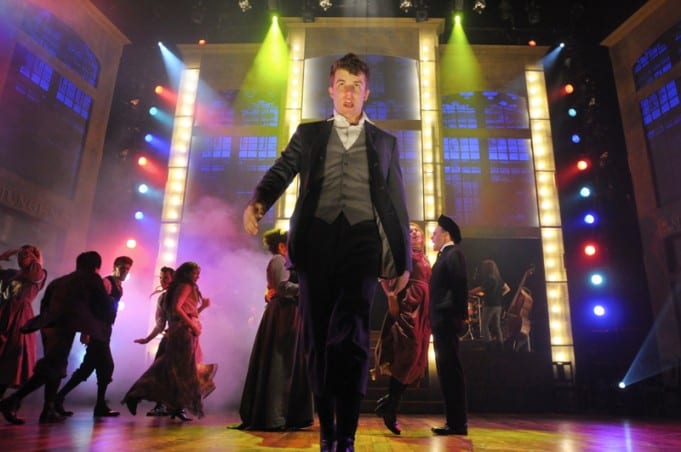 Book and lyrics by Steven Sater

Guest post by Pat ReardoIf you are interested in seeing a musical that deals with the lighter side of teenage troubles, stay home and watch reruns of Glee.

If, however, you would like to see one of the most innovative and provocative productions presented in the South Bay in recent memory, the new production of Spring Awakening at the SJ Rep will entrance you.

Spring Awakening juxtaposes the controversial 1892 play by Frank Wedenkind with modern rock music in a timeless and emotional coming of age tale that dwells on the most disturbing aspects of adolescence.Set in socially restrictive imperialist Germany the story follows the lives of several teenage school children who are awakening from childhood to a confusing and cruel young adulthood. This compelling tale is energized by Duncan Sheik’s throbbing musical score. When his music is paired with Steven Sater’s emotional lyrics and book the teenagers almost leap from the stage into the audience’s laps. Rick Lombardo has successfully updated this multiple Tony Award-winning musical with original choreography by Sonya Tayeh. Her “combat-jazz” dance sequences bring a realistic sense of teenage emotional angst and anger to this inventive production.

Basically an ensemble piece, the story centers around Melchoir (Jason Hite) who pushes the bounds of social propriety in his exploratory quest for sexual freedom beyond the restrictive confines of the repressive culture of the day. His following includes the hapless and confused Moritz (Miguel Cervantes) who is destined for a tragic end, and Wendla, a naïve young woman who falls in love with Melchior as she explores the unknown world of human sexuality. The young cast is universally excellent. While the veterans shine, the production greatly benefits from new talent available from The Rep’s recent relationship with the Drama Department at San Jose State.

The open set is transformed by creative work from Lighting and Media Designer David Lee Cuthbert. Innovative graphics provide the only backdrop for the scene changes. The minimalist props including chairs, a table, and a few benches, are cleverly repositioned and repurposed to serve numerous functions including platforms for the performers to vault onto and from during the dramatic dance sequences.

If this opening presentation is any indication of what The Rep has in store for audiences for the rest of the season, we have a great deal to look forward to.

Lead photo: Melchior (Jason Hite) struts to the front as the rest of the teens dance in the background in San Jose Rep’s production of Spring Awakening.