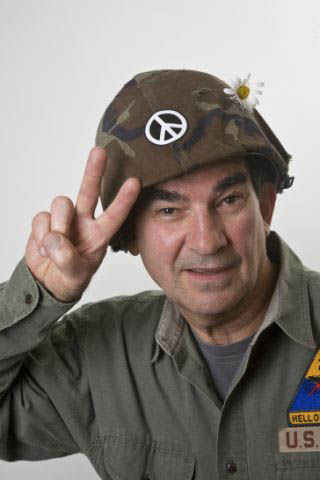 Ladies and Gentleman: Rambo has been spotted… on a stage in Berkeley…

The Marsh Berkeley has announced that Howard Petrick’s RAMBO: The Missing Years, an account of the misadventures of a Vietnam-era draftee who “annoys” the military brass by asserting his right to organize his fellow GIs against the war, will hit the stage here next month.

You’ll be happy to know that Rambo maintains an unblemished military record, breaks no rules and continues to carry out his military duties.

The story begins as Petrick (aka ‘Hanoi Howie”) reports for the draft and refuses to fill out the forms, befuddling the army bureaucracy for the first of many times to come.

A twenty-year-old anti-war activist in 1966 when he was drafted into the Army, Pvt. Petrick was a model soldier except when the subject of Vietnam came up. At that point, he missed no opportunity to make his opinions known to his fellow GIs and anyone else who would listen. His activities helped ignite an antiwar movement in the barracks and led to a confrontation with the brass. Calls from the Pentagon! Threats of treason! By the time it was all over, Petrick, who never backed down, had become something of a celebrity. He even had a song written about him and was the subject of an article in the New York Times.

Directed by Mark Kenward and developed with David Ford

The Cabaret at The Marsh Berkeley, 2120 Allston Way, near Shattuck