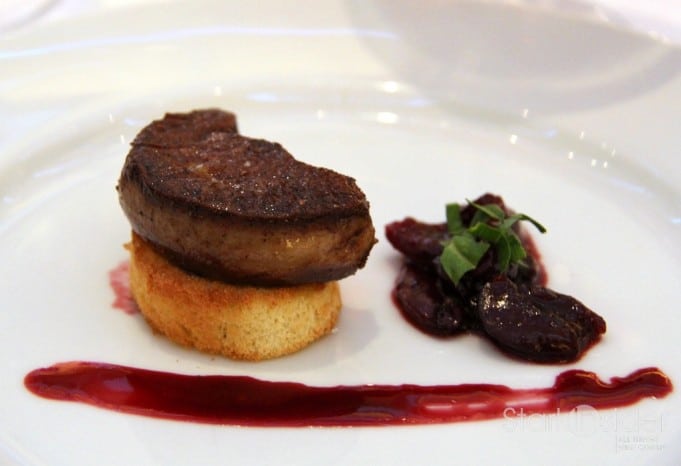 I admit it. I love the rich, buttery texture of foie gras…seared.

One of my most memorable meals was at Robert Mondavi Winery. The highlight of the dinner was a Seared Foie Gras, Pain de Mie Crouton, Mexican Tarragon, Cherry Compote by Chef Jeff Moser.

However, this gourmet delicacy, which is priced at about $55 per pound, may disappear off San Francisco Bay Area restaurant menus this July when California becomes the first state to ban the production and sale of foie gras.

The controversy causing this ban is rooted in how foie gras is made. Producing this delicacy, as outlined in the latest issue of Bloomberg Businessweek, requires fattening of the duck or goose by force feeding it corn (gavage). Evidence of this practice dates back to Egypt 2500 BC and results in livers that are 8 to 10x the weight of a regular liver.

The actual California law banning foie gras produced by force feeding in 2004 was postponed 8 years to give foie gras purveyors  time to innovate and find new methods which would be more humane. Unfortunately, they haven’t.

The primary purpose of force feeding a goose or duck corn boiled in fat doesn’t have to do with size. Sure, the liver is sold by weight so having a liver weigh 10 times greater than its regular-sized cousins does increase revenue per bird. However, when it comes to such revered delicacies, quality is king. The force feeding causes fat to be deposited in the liver to produce the coveted buttery texture, a signature of exceptional foie gras. It’s akin to the marbling in steak. This is why I think birds fed a “normal” amount of food would not produce the quality of livers needed.

As a foie gras lover, I am conflicted. I can appreciate that force feeding is not pleasant. Yet, is it any worse than the other practices used to produce the foods we consume? Ah, why does something that taste so good riddle one’s conscience with such guilt?

I’ll go now and munch on a carrot.