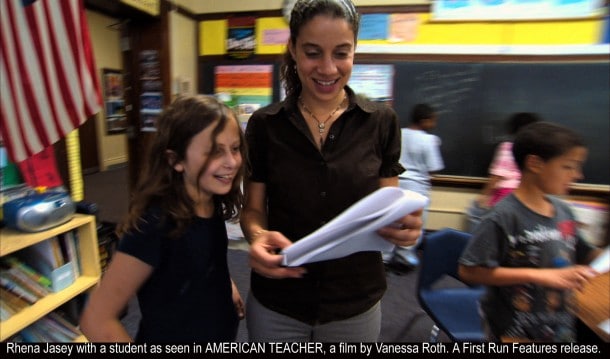 Directed by Vanessa Roth and narrated by Academy Award-winner Matt Damon, American Teacher is based on the premise that teachers are the most important school-based factor in a child’s future success — a conclusion ultimately reached by a slew of research from different organizations, including one funded by The Bill and Melinda Gates Foundation. Yes, after millions of dollars in studies, the verdict is one that is obvious to those of us who have had great teachers.

So if we are to improve education in our nation, should we not look at the current conditions facing teachers and what it would take to attract and retain the best talent?

This documentary takes the national debate about education to a personal level by chronicling the journey of four teachers from different backgrounds, disparate parts of the country and phases in their teaching career. One consistent factor across all four teachers though, is that they have been recognized as some of the best in their field. Like any field, there are those that are bad at their jobs. This scope of the film does not touch on this latter group. I, too, am a firm believer that in order to engender excellence in any system or organization, one should focus on promoting excellence and removing incompetence.

The stories of each teacher profiled are heart-wrenching. Common themes include low pay, long hours, dealing with litigious parents and juggling with the family issues that arise from these work conditions.

The chronicle of Erik Benner, a teacher who has been teaching Texas history in the Dallas/Fort Worth area for 15 years, touched me deeply. He had to find a second job selling electronics in a struggle to support his wife and two daughters. The fate and journey of each teacher is different, yet all four represent what millions of other teachers around the nation must endure to stay in the profession. For example, 31% of teachers have second jobs and that number climbs to 62% if you include school-related activities like coaching. This is astounding when the film makes you realize that teachers can easily work 65 hours a week when you include the amount of time outside of school hours needed to grade assignments or prepare for classes.

Erik’s situation is the fate of those teachers that decide to stay in the profession despite the burdens. Jonathan Dearman, a lifelong San Francisco resident and award-winning teacher is shown to ultimately leave the teaching profession in 2002 to pursue a real estate business in order to support his family. He notes in the film that even in a slow year, he makes double what he earned on his teacher’s salary. He is also not alone as 20% of teachers in urban areas quit every year. It represents a lost of talent and a huge cost to try to replace these teachers.

The film makes it clear that there is a problem with how excellent teachers are treated and paid in our society. It humanizes the national debate, by focusing on the lives of four teachers, but also presents hard data to show their stories are not anomalies.

American Teacher left me with a lot to think about and knowledge that there is a better way. Director Vanessa Roth notes that in other countries teaching is one of the best paid professions, there is a stringent selection process and teachers highly revered by society. In some cases teachers garner even more respect than doctors.

Roth highlights some innovations in America that are providing sparks of hope. One such program is the Equity Project Charter School (T.E.P.) which reallocates its public funds to enable it to pay teachers a salary of $125,000 a year with a $25,000 bonus. Rhena Jasey, one of the teachers profiled does end up serving at a T.E.P. in New York City.

American Teacher is a moving documentary that gives us a glimpse into the world of teaching and leaves us questioning our own values as a society that underpays and undervalues excellence in the field.