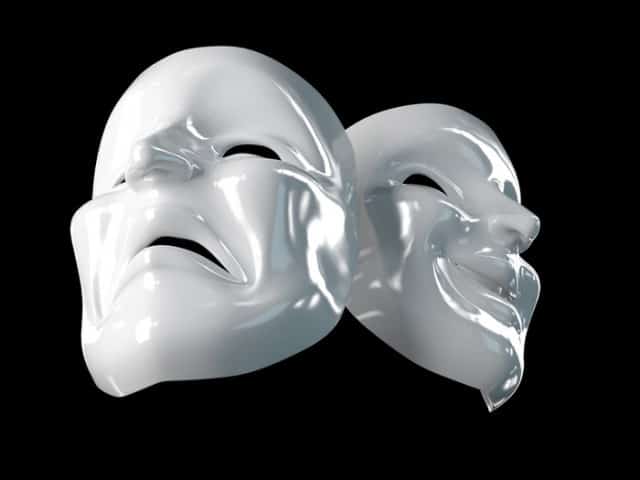 While preparing to review current productions of “A Streetcar Named Desire” and “Nine” this weekend, an unexpected common theme emerged; the protagonist breaks from reality and experiences an entirely different world while simultaneously on stage, others are firmly rooted in the present. In other words, both shows delve into a simultaneous fantasy-reality duality, albeit in different forms.

In film, with numerous cinematic tools at hand, it’s not all that difficult to address this duality. On stage, however, there is no superimposing of film cuts (most of the time anyway), so other means are employed to bring this duality to life. A lot can be done with creative staging, costuming, and of course with lighting and sound effects, but it’s important to establish consistent rules of engagement, or there is a risk of losing the audience.

Admittedly, this isn’t new, but it is somewhat intriguing. Numerous shows have to incorporate this duality in some fashion. For example, in “City of Angels” (which incidentally bears no relationship to the movie of the same title), the dual plot line is segregated by reality and fantasy – and the audience is privy to both. In that show, reality is in full color, with fairly normal looking ambient lighting, while on the other side of the stage, fantasy is in shades of gray through costuming and with much more sinister, darker lighting.

Productions of Stephen Sondheim’s “Follies” often employ a similar device in costuming; the present reality is in color, while ghosts of the past are in muted beige or black and white, and both are visible simultaneously. Of course “Follies” breaks its own rule when the entire story shifts into full-color fantasy late in Act 2.

The more unique aspect of the commonality between “Streetcar” and “Nine” is that this duality surrounds a single character, Blanche DuBois in the case of “Streetcar” and Guido Contini in “Nine”, although it plays out in drastically different ways between the two shows.

“A Streetcar Named Desire” is not a musical, but instead is originally a play that examines the psychological factors at work as it broaches a difficult intersection of violence, sex, delusion, and harsh reality in a blue-collar region of New Orleans. Blanche is the outsider, putting on an air of distinction, separating herself from the working class. Her departures from reality start as memories, and intentional distortions of the truth from her perspective, but as the play continues, these retreats become more frequent and involuntary.

In “Streetcar”, several cues surface to tell the audience that Blanche is not in the present. In the staging, while talking with her companions, Blanche tends to look past them when her mind is elsewhere which plays realistically. Additionally, a “Varsouviana” polka is used as an indicator, always playing in the background when Blanche has withdrawn into her mind. Other technical effects are also employed to further the distinction primarily involving sound (e.g. a gunshot which ends both the music and the current reality escape) and some clever lighting effects (e.g. grotesque shadows) that only she can see and hear.  The audience, seeing and hearing everything, is aware that these aren’t “really” there, but they are very effective.

“Nine” on the other hand, is a musical.  Set in Italy, it deals with the world of film, fidelity, and Guido’s mid-life crisis spanning his creative life as a famous film director and his personal life. When Guido slips away into his fantasy world, he brings with him several characters that anybody in the “real” world on stage can’t see. The primary clue that Guido’s mind is elsewhere is that he is lit with a spotlight, and those in reality are in ambient light.  Sometimes, portions of the stage are frozen in time depending on the level of involvement of the fantasy, and sometimes reality recedes completely leaving Guido alone with his hallucination. My review, Forty and Nine – a State of Mind touches on this.

While different than the implementation in “Streetcar” given that many characters inhabit Guido’s fantasies, there still is some similarity in that the fantasy is Guido’s alone, he’s not in control of his breaks from reality, and there are times when the duality exists and both are superimposed. Eventually, the two worlds collide when Guido begins filming his movie, which is in the present, albeit a very fanciful present. And even then, there are hints of his fantasy world creeping into the movie, still using the spot light to indicate he’s drifted away again amidst the chaos of the set.

To many, all of theatre is fantasy, and in part, they are correct.

Hence, unlikely as it seems, “Streetcar” and “Nine” share a pinch of common ground in portraying a clear fantasy-reality duality on stage.

One final example of this duality concerns Arthur Miller’s protagonist, Willy Loman in “Death of a Salesman”, a non-musical play dealing with another life-crisis situation born primarily of guilt – guilt over career path, family choices, and indiscretion. As Willy’s life spirals out of control, he has discussions with his dead brother Ben, and while the audience sees Ben and hears those discussions, the other characters are completely unaware of them. Like in “Streetcar” Willy’s gaze changes when he’s disengaged into fantasy, and he’s often lit with much of the rest of the stage in darkness or freeze frame.

The duality is notably evident in one scene where Willy is playing cards and talking with his friend and neighbor Charley in the real world while simultaneously debating his life choices with his brother who has reappeared. Ben’s clothing is different than the rest of the cast, and his dialog and vocal timbre along with subtle lighting changes are used to suggest he’s not really there.

To many, all of theatre is fantasy, and in part, they are correct. Even so, there are bounds of what is “real” vs. what is truly “fantasy” within the confines of a given story. As the examples above suggest, there is a certain art, along with a challenge, to portray them simultaneously and create a discernable duality between them. In that, even very disparate shows can share common ground while embarking on that journey with the audience.