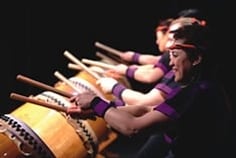 Everybody loves a good festival, and San Jose Taiko has performed in hundreds of them over the past 38 years. San Jose Taiko announced it will presents its annual Rhythm Spirit concerts on October 21 and 22 at the Campbell Heritage Theatre. This year’s performance will explore the sights and sounds of the Japanese-American festival in a dynamic concert setting.

“Our October Rhythm Spirit 2011 Concert series is our way of recognizing our roots—how far we’ve come, as well as what things remain constant and true about San Jose Taiko,” said incoming Artistic Director Franco Imperial, “For this concert, we’ve captured those special moments that arise from our festival participation and will present them in a stylized way. ”

This year’s performance includes new works and arrangements as well as the same electrifying energy for which San Jose Taiko is internationally known.

“This year’s program will represent the continued evolution of San Jose Taiko,” added Wisa Uemura, incoming Executive Director. “We will be paying homage to the legacy of San Jose Taiko as well as jumping to the next phase of artistry.”

San Jose Taiko was formed in 1973 in San Jose’s Japantown, and has grown into a dynamic, world-class taiko ensemble that performs more than 170 times each year locally, nationally, and internationally. This year’s production celebrates the origins of the unique style for which San Jose Taiko is renown.

Founder Roy Hirabayashi and Artistic Director Emeritus PJ Hirabayashi have been a big part of the laying down the foundation for the development of taiko in North America,” added Imperial. “The teachings of Roy and PJ have become synonymous with the SJT style and the reason that the company has been so successful.”

Recently founders Roy and PJ Hirabayashi were honored by the National Endowment for the Arts’ National Heritage Fellowship, the nations highest honor in the folk and traditional arts. They will be in Washington D.C. for a series of events, and will receive their awards at the Library of Congress in September.

Tickets are $25 for adults and $20 for students and seniors. All seats are reserved, and group rates are available.