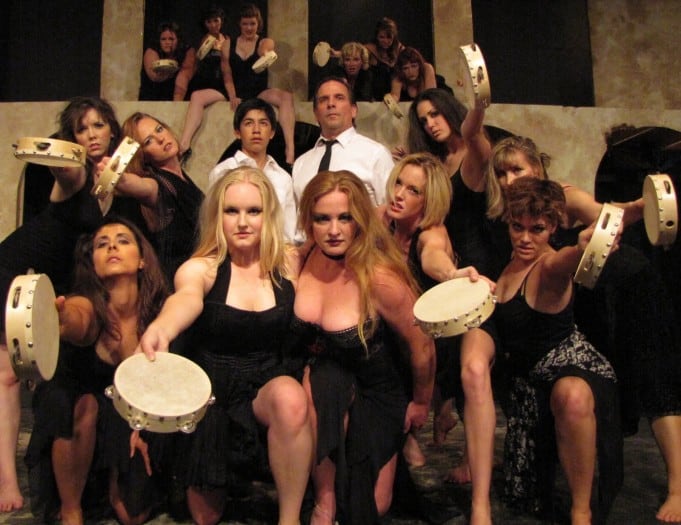 Nine is the Tony Award-winning musical based upon the semi-autobiographical Federico Fellini film, 8 ½, set in 1960s Italy. During that period the famed director’s body of work consisted of uniquely personal stories most notable for their surreal, dreamlike imagery and visual extravagance. The show was warmly received when it opened on Broadway in 1982, but its popularity was somewhat eclipsed by the simultaneous debut of the phenomenally embraced Cats by Andrew Lloyd Webber. A less well-regarded adaptation for the silver screen was released in 2009.

Our protagonist, Guido Contini (Tim Reynolds), is an esteemed auteur who’s just turned 40 and is facing a mid-life crisis. He’s run out of ideas for a movie he’s been hired to make, and his relationship to his beloved wife, Luisa (Aoife Stone), is in serious jeopardy.

They attempt to rejuvenate both their failing marriage, and his creative acumen, by visiting a Venetian spa. What ensues, however, is a fanciful, time-bending journey of self-discovery as he attempts to come to terms with the many women of his life, both past and present.

Despite the modest production values and minimalist, functional set design (Ron Gasparinetti), the blending of the fantastic and real elements is mostly successful – assuming one is willing to suspend disbelief and use a little imagination. The too literal-minded, however, might have difficulty accepting Guido’s recurring interaction with his nine-year old self (the wonderful Nicolas Sancen).

And the superb musical direction by Jean Narunsky, accompanied by a small ensemble of musicians (Samuel Cisneros, Paula Filseth and Karen Lindblom), with sound by master designer George Psarras, make one forget the absence of a full orchestra

At first blush Reynolds does not strike one as quite the lothario type, but he evinces enough of an artist’s ego, passion, and an insouciant, Latin charm to win one over. And one cannot underestimate the masculine appeal of the line “I can put you in my film” – especially when delivered with a flawless Italian accent.  His vocalizations of the many magnificent Maury Yeston tunes (“Only with You”; “The Script”) are certainly adequate but not at a par with his acting skill, and they’d often benefit from a bit more projection.

On the other hand, Molly Thornton, as film producer Liliane La Fleur, does justice to the score and never forsakes the back row. She lights up the stage with her rendition of “Folies Bergeres,” featuring the outstanding (and very sexy) female chorus and brilliant staging and choreography by Jeffrey Bracco and Shannon Stowe, respectively. Her dubious French accent, however, does not reflect the uniformly fine work by dialect coach Patty Reinhart.

Ms. Stone brings a regal bearing and radiant beauty to her role that make it easy to understand why a narcissist like Guido would want to marry her – she’s exactly the type of woman a man of his stature would want to be seen with in public. She’s totally convincing, and despite her limited singing voice, her interpretation of the bittersweet “My Husband Makes Movies” is filled with pathos and a palpable ambivalence.

If Luisa is Guido’s “Madonna,” Carla Albanese is the “whore” one would never take home to mother!  And as played by the delightful Elizabeth Santana, his lust for her is entirely understandable. The uninhibited sexuality of her performance of  “A Call from the Vatican,” both in terms of its vocal and physical (ahem) prowess, generates enough heat to ignite the theatre! She impresses  even more, however, by revealing an exceptional emotional depth and versatility with the poignant “Simple.”  Bravo!

Strong supporting turns are also given by Kristin Brownstone as Guido’s muse, Claudia,  (“A Man Like You”;  “Unusual Way”) whose inspiration frees him of his creative block, and by Kereli Dawn Sangstack as the earthy seductress, Sarraghina (“Be Italian”), who introduces the young Guido to the mysteries of sex. And recognition must go to the immensely talented Ruth E. Stein (Mama) and Robyn Winslow (Our Lady of the Spa), who prove Stanislovsky’s theory that “there are no small parts.”

Although  “The Grand Canale” sequence is probably the most spectacular with its splendid, colorful costume design (Amy Conners and Jill Schwinn) and impressionistic use of undulating reams of shimmering blue fabric as sea waves, the images that linger most are the simple scenes of Guido waving a baton – like a symphony conductor – that bookend the story. Perhaps it’s only during those few moments when he is truly in control of his life.