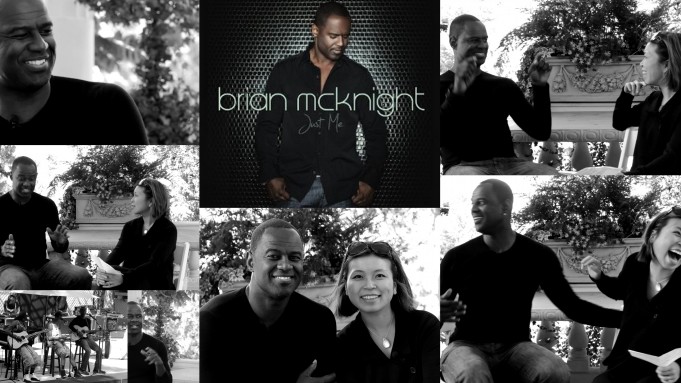 R&B superstar Brian McKnight normally takes only 4 hours to finish a song he tells us. The trick is not to worry about “special candles” or a uniquely prepared writing environment. In fact, inspiration may even come when he’s watching SportsCenter on ESPN!

But the real secret to his success may lie in a special purple drink he calls “Why Not?”

Yes, McKnight is back in a big way. A new album “Just Me” landed this week, and his new single, “Fall 5.0,” has been making the rounds including, of course, on the Internet.

“Rule number one is that you do not write a song in a roomful of people,” McKnight says. “Someone says ‘What do you think about this?’ Next thing you know they’ve replaced an ‘and’ with ‘the’ and they deserve 15% of your song.”

Recently Brian swung through the San Francisco Bay Area for an outdoor performance at the Montalvo Arts Center up in the beautiful Saratoga hills. I met up with him for a very interesting discussion. For the record, he’s still tall, buff, cool. He sported an oversized, hip watch, and was dressed in a tight black T and jeans for the interview. Not bad for a guy with two full grown, musically inclined sons — both of whom share the stage with him (often the only chance they get to see each other), and, as I learned, work the midnight shift to keep his sound current.

Watch this special Stark Insider TV segment as the R&B superstar discusses his new album (“Just Me”), reveals what it’s like working with his two sons and brother, shares his thoughts on the state of the music industry, and … opines about … Chicken Parmesan (!).

Even though his smartphone keeps ringing, I somehow manage to keep things on track, sort of. I’ll let you be the judge.