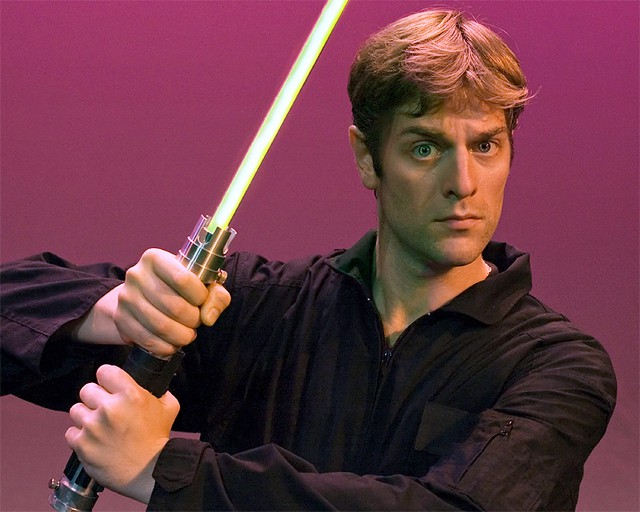 The Susan and Phil Hammer Theatre Center
Directed by T.J. Dawe
Written and Performed by Charles Ross
July 14 - 17, 2011
60 minutes with no intermission
Review by Stark Insider

One-Man Star Wars Trilogy was originally a 20-minute comedy sketch that grew into an hour-long solo tour de force featuring its talented creator, Charles Ross. It’s one obsessed man’s loving, manic tribute to the phenomenally successful first trio of movies, done with one’s tongue firmly planted in cheek. Familiarity with the sci-fi/fantasy saga is essential, however, if one is to fully appreciate the experience.

Without the aid of any elaborate set design, special costuming, nor the accompaniment of any musical instrumentation, Mr. Ross manages to perform each memorable episode mimicking both the physical and mechanical action within a scene, simultaneously reciting dialogue with convincing impressions of each iconic character, all while providing both sound effects and hummed excerpts from John Williams’ magnificent score!

Although the performance is clearly scripted and carefully choreographed – enhanced by simple, but effective, lighting design by Mike Schaldermose – the hilarious Mr. Ross doesn’t miss an opportunity to occasionally ad-lib a few lines or briefly engage the patrons.

On opening night the charismatic performer even asked the receptive crowd to participate in a prank on a young theatregoer returning from the restroom (in the middle of the show) that worked beautifully. Stage manager Christine Fisichella adapted well to the impromptu diversion and it did not in any way diminish the overall effect of the play.

Between each of the three hysterical, exhausting “acts,” the affable Canadian takes a short break on stage as himself to talk to the audience. And after the finale he once again steps out of character with a short epilogue explaining the genesis of the show and how he ultimately obtained permission from Lucasfilm to continue parodying their intellectual property.

Sadly, its limited run at the San Jose Rep ends in a few days. For the Star Wars fan, casual or hardcore, this is a trip to the theatre that should not be missed.

Written and Performed by Charles Ross
Directed by T.J. Dawe