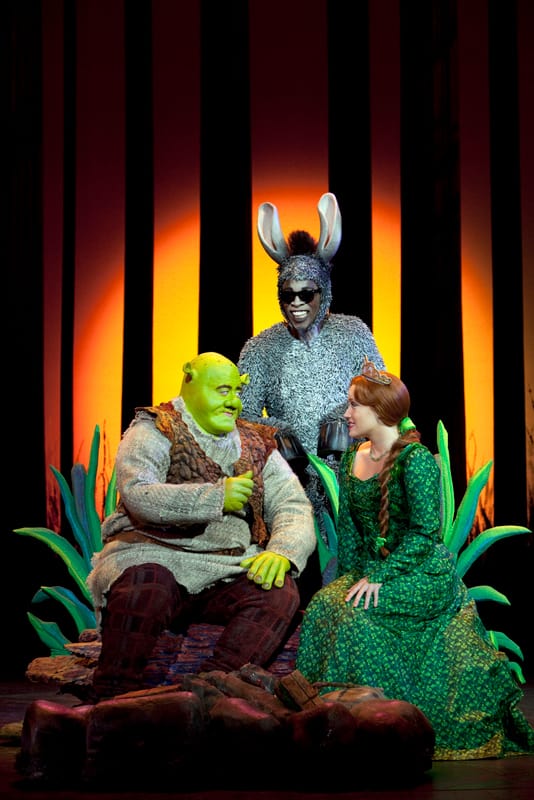 San Jose is about to go green! Organizers have announced that Shrek the Musical will play the San Jose Center for the Performing Arts this September.

An entirely new musical which opened on Broadway December, 2009, the show is based on the story and characters from William Steig’s book Shrek!, as well as the DreamWorks Animation film Shrek, the first chapter of the Shrek movie series. (For a behind-the-scenes look at the musical, check out the video below as Loni visit Shrek himself at The Orpheum in San Francisco!).

Shrek the Musical tells the story of a swamp-dwelling ogre who goes on a life-changing adventure to reclaim the deed to his land.

Joined by a wise-cracking donkey, this unlikely hero fights a fearsome dragon, rescues a feisty princess and learns that real friendship and true love aren’t only found in fairy tales.

“We are thrilled to send Shrek the Musical to theatres across the country,” said Bill Damaschke, President of DreamWorks Theatricals, “and for American families to experience their favorite ogre and fairy tale creatures live on stage.”

Based on the Oscar-winning DreamWorks film that started it all, brings the story of everyone’s favorite ogre to life on stage, opens Broadway San Jose’s 2011-2012 season. In a faraway kingdom turned upside down, things get ugly when an unseemly ogre – not a handsome prince – shows up to rescue a feisty princess. Throw in a donkey who won’t shut up, a villain with a SHORT temper, a cookie with an attitude and over a dozen other fairy tale misfits, and you’ve got the kind of mess that calls for a real hero. Luckily, there’s one on hand… and his name is Shrek. Features a score of 19 all-new songs, big laughs, great dancing and breathtaking scenery.