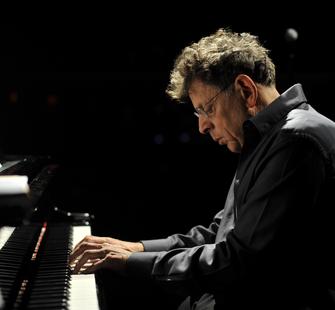 The popular Piano Masters Series runs from January 14 through April 27, with a rare solo appearance by Philip Glass, the most influential composer of the late 20th century, on April 7.  The nine time Grammy winner Eddie Palmieri and Grammy winning Brian Lynch Jazz Quartet are scheduled to bring their jazzy Latin rhythms to Montalvo.

“We are thrilled with this year’s lineup of immensely accomplished artists of such high caliber and diversity,” said Angela McConnell, the executive director of Montalvo. “Concerts in the Carriage House are unmatched for the patron experience -the intimate setting, incredible sight lines and strong acoustics make a performance in the Carriage House unlike any other live performance.”

Tickets go on sale to the general public on August 11 and to Montalvo members-only August 1-10.

New this year: a “Piano Pass” may be purchased for all five concerts in the Piano Masters Series for $200 for the general public and $190 for members – a savings of up to 15% over single tickets. All performances take place in the intimate 300-seat Carriage House Theatre at Montalvo’s Arts Center.

For the past two decades Acoustic Alchemy has dominated the contemporary jazz scene earning three Grammy nominations and fans worldwide. Their albums have reached number one on the adult contemporary charts, and fans should expect nothing less from their new CD, Roseland.

Singer-songwriter and actress Melissa Manchester is a superstar. Best known for her international hits, “Midnight Blue,” “Through the Eyes of Love” and “Don’t Cry Out Loud,” Manchester has won numerous Grammys. She has written some of the best songs of the era and has been honored by the National Academy of Recording Arts and Sciences with a Governor’s Award. Manchester’s star turn in the Rubicon Theatre’s 2010 production earned the “Ovation Recommended” designation from the L.A. Stage Alliance.

One of today’s premier acoustic ensembles, Steep Canyon Rangers remains true to its bluegrass, country roots, and yet creates a powerful new brand of music. Nominated for Album and Gospel Performance of the Year by the International Bluegrass Music Association in 2008, their success continued in 2010 with their solo record Deep In The Shade, which remained on Billboard’s Bluegrass Top 10 for 18 weeks. In March 2011, the band released its first collaborative record, Rare Bird Alert, featuring famed comedian and author Steve Martin on banjo, which debuted at number one on Billboard’s Bluegrass chart.

Described as “one of the most intriguing, idiosyncratic vocalists of our time” by USA Today, Rickie Lee Jones’s performances are infused with rock, blues, pop, soul and jazz. A two time Grammy winner, Jones is ranked #30 on VH1’s 100 Greatest Women of Rock N’ Roll. Her debut album featured such hits as “Chuck E’s in Love” and “On Saturday Afternoons in 1963.” Her three-disc anthology Duchess of Coolsville (Rhino) was released in 2005 and featured essays by Randy Newman, Quincy Jones, and
Tori Amos.

Folk rock singer-songwriter Marc Cohn returns to Montalvo after a sold-out performance last year. Best known for his song “Walking in Memphis” from his 1991 platinum album Marc Cohn, which won him a Grammyâ for Best New Artist. Nominated for Song of the Year and Best Pop Vocal in 1992, Cohn’s most recent CD, Listening Booth: 1970, was released to critical acclaim last year.

Richard Thompson is a legend worldwide, and is back at Montalvo by popular demand. He was named by Rolling Stone as one of the Top 20 Guitarists of all time, is the recipient of the Orville Gibson Award, the 2010 Mojo Les Paul Guitar Award, a BBC Lifetime Achievement Award and a Grammy Award nomination.

A lynch-pin of the great James Brown’s band, Parker’s funky and electrifying music is known to prompt entire audiences to jump to their feet and dance all night. Parker released two successful solo albums in 1990, which spent 10 weeks at the top of Billboard’s Jazz Charts. Parker has also played with George Clinton, Bootsy Collins and has toured with Prince since 1999. Fresh off a tour that has taken him everywhere from Moscow to San Francisco, Parker has been keeping funk alive for over twenty years. Weaving songs and riffs from classic Motown, R&B and soul, Parker demonstrates the absolute breadth and musical aptitude that he incorporates into this established genre.

Eric Bibb’s talent as a performer and songwriter continues to draw international critical acclaim. He has received a Grammy nomination, four W.C. Handy Blues Award nominations, and won the “Best Newcomer” title in the British Blues Awards. Bibb’s much-anticipated CD, Troubadour Live, was released in May 2011. The iconic Taj Mahal said, “Eric has a great voice, is an excellent performer and has a great knowledge about the roots of this music.”

Known as the “Hawaiian Jimi Hendrix,” Grammy nominated Willie K’s Willie Kahaiali`i) performances offer a wide range of musical styles from reggae to rock and blues to opera. This spectrum has earned him the reputation as Hawaii’s most versatile artist, combining Eastern influences with unmatched guitar virtuosity. Willie has played with such musical giants as B.B. King, Santana, Al DiMeola, Willie Nelson and Prince.

AN EVENING with SPENCER DAY: Saturday, February 11, 8pm
Valentine Celebration Dinner/Concert Package: $130 per person. The 3-course menu presented by Le Papillon Restaurant will include tickets for the concert (limited to the first 100 people).

Vocalist-songwriter-pianist Spencer Day brought down the house when he last performed at the Carriage House Theatre in February 2011. His voice inspires comparisons to that of Harry Connick Jr. and his compositions to those of Cole Porter, Paul Simon and Rufus Wainwright. His latest release, Vagabond, demonstrates Day’s eclectic taste and remarkable ear for music.

Second City is back by popular demand for the second consecutive year. From the company that launched the careers of famous comedians such as Stephen Colbert, Tina Fey, Steve Carell, Bill Murray, Gilda Radner, and John Belushi to name a few, come the next generation of the comedy world’s best and brightest in an evening of hilarious sketch comedy and Second City’s trademark improvisation.

Paris-based jazz musician Kyle Eastwood is a star in the jazz world. Son of actor Clint Eastwood, Kyle is an accomplished musician and composer. His second album, Paris Blue, rose to number one on the French jazz charts. He’s composed pieces of music for several of Clint Eastwood’s films, including Academy Award winners, Mystic River and Million Dollar Baby. His band performs on three continents and receives the highest acclaim.

A two-time Grammy winner, Taj Mahal is one of the most influential American blues and roots artists of the last 50 years. A self-taught composer and multi-instrumentalist, Mahal has helped reshape the definition and scope of blues music over the course of his long career by distilling countless musical traditions from multiple sources. Maestro, his latest CD, was nominated for a Grammy in 2009.

With a cast of four Canadian comedy all-stars, “Women Fully Clothed” never disappoints. In a pastiche of hilarious comedy sketches and improvisation, Kathy Greenwood of “Whose Line is it Anyway?”; Robin Duke of “Saturday Night Live”and Groundhog Day; Janye Eastwood of My Big Fat Greek Wedding and Chicago; and Teresa Pavlinek of “The Jane Show” come together to create the ultimate “all-estrogen comedy dream team.” (Toronto Star)

This double bill of two stellar guitar trios is perfectly matched for guitar aficionados. The California Guitar Trio: Bert Lams, Hideyo Moriya and Paul Richards, performs everything from unique originals to dazzling interpretations of jazz, classical, and even surf rock. The Montreal Guitar Trio: Glenn Levesque, Mark Morin and Sebastian Dufour, was nominated for Concert of the Year at the prestigious Prix Opus 2002, celebrating musical excellence in Quebec.

American classical pianist Simone Dinnerstein’s 2007 release, “Bach’s Goldberg Variations,” ranked number one on Telarc and the Billboard Classical Chart in its first week, as did her follow-up album, The Berlin Concerta. Her latest release, “Bach: A Strange Beauty,” debuted at number one on the Billboard Classical Chart in January 2011. A graduate of Julliard, Dinnerstein’s performance schedule includes debuts at The Kennedy Center, Vienna Konzerthaus, Vienna Symphony, Lincoln Center and Berlin Philharmonie.

A nine time Grammy winner, Eddie Palmieri is known for his distinctive blend of jazz piano and instrumental solos with Latin rhythms. Referred to as the “Sun of Latin music,” Palmieri’s mark on the history of Latin music goes unquestioned. Brian Lynch is a Grammy winning, New York-based jazz trumpeter, who’s collaborated with jazz artists such as Benny Golson, Toshiko Akiyoshi, and Charles McPherson; Latin music icons as diverse as Hector LaVoe and Lila Downs; and pop stars such as Prince.

Held every five years, the highly acclaimed International Tchaikovsky Competition has been regarded as one of the major events in the global music community for more than 50 years. The gold medal winner of the piano section, picked from 122 competing musicians from 25 countries, will perform for an exclusive engagement at Montalvo one night only.

Philip Glass is widely considered to be one of the most – if not the most – influential composers of the late 20th century. Through his operas, symphonies and compositions for his own ensemble, and his wide-ranging collaborations with artists ranging from Twyla Tharp to Allen Ginsberg, Woody Allen to David Bowie, Philip Glass has had an extraordinary and unprecedented impact upon the musical and intellectual life of his times.

Joyce Yang’s career was launched in 2005 when she became the Silver Medalist of the 12th Van Cliburn International Competition. As the youngest contestant, she swept two additional awards as an all-around winner, receiving the Steven De Groote Memorial Award for Best Performance of Chamber Music with the Takàcs Quartet, and the Beverly Taylor Smith Award for Best Performance of a New Work. Critically acclaimed as “the most gifted pianist of her generation,” Yang has established herself as one of today’s leading artists through her innovative solo recitals and notable collaborations with the top orchestras.