We sat in complete silence, collectively holding our breath like the moment before Ryan Seacrest announces who won American Idol, as Teacher ferociously pumps water over Helen’s arm while spelling the letters into her hand, again and again.

This miraculous scene has been imprinted in my mind by numerous “Miracle Worker” books, plays and movies (including both Patti Duke versions) to the point where I could reenact the scene verbatim, which I often have in the past, to the embarrassment of my niece. And young, local talent, Becca Tumlinson did not disappoint as she theatrically tossed back her tangled hair, violently threw the water pitcher to the ground, and scrunched up her face as she tried to utter those long forgotten syllables. It was sheer perfection.

I had been invited to join a press trip exploring the Shoals area of Northern Alabama, which I immediately accepted after reading that we would experience the golden anniversary production of the “Miracle Worker” performed right on the grounds of Helen’s home. We spent the whole (wonderful) day completely immersed in her life. 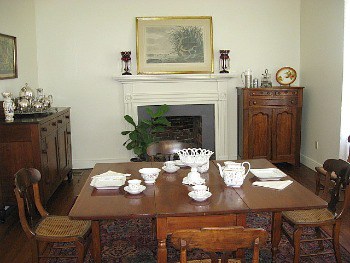 As a long time admirer of “America’s First Lady of Courage” it was thrilling to see the Keller dining room (the site of many battles between Helen and Annie), the cradle holding her baby sister that Helen overturned in a fit of jealousy, the cottage, where Annie insisted she stay alone with Helen (surprisingly, it’s located only a mere 100 ft. from the main house.)

You can even touch the famous black water pump! 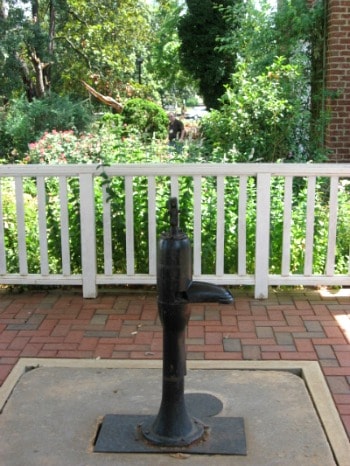 The home is filled with their original furniture and personal mementos such as Helen’s clothes, Braille books and typewriter, letters she hand printed, wonderful photographs of the family and even a few pieces of china that survived Helen’s tantrums.

We were then invited to join some of the cast for a pre-theater dinner at the homey Claunch Cafe, featuring tasty, traditional southern food, perhaps some of Helen’s favorites? Chef/owner David Claunch dished up a mean squash casserole, greaseless fried chicken, mashed taters and gravy and a tangy key-lime pie. After speaking with the play’s director we learned a couple of surprising facts. Annie Sullivan did not have an Irish accent. It was written into the for Anne Bancroft. Also, Helen’s birth date is wrong (it should be 1880 not 1881) on the bronze plaque at the National Cathedral in Washington, DC.

Finally it was time to take our seats for the outdoor play. The weather was perfect as was the inspiring, timeless, Broadway-caliber performance.