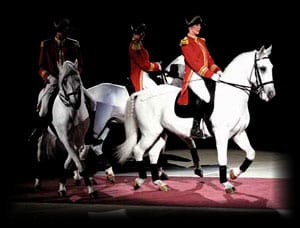 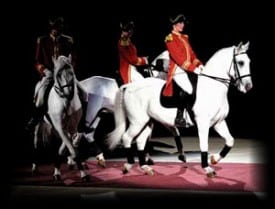 The “World Famous” Lipizzaner Stallions announced they will present their 41st anniversary presentation of the “Dancing White Stallions.” The show takes place July 10 at the HP Pavilion at San Jose.

Over the years, more than twenty-six million people throughout North and South America, Europe, Australia and Hawaii have seen this internationally acclaimed spectacle. The Lipizzaner Stallion has galloped boldly out of the pages of over 425 years of history and are now preserved as an equestrian work of art, performing a unique equine ballet.

Harkening back to a time when the horse was a symbol of grace and majesty, the Lipizzaner Stallions are truly a great experience to be enjoyed by the entire family.

All new music, choreography and routines have been incorporated in this anniversary edition with a major emphasis on the historical background and foundation of the Lipizzaner breed, from its original breeding and use as a horse of war to a horse of nobility and aristocracy to a living form of equestrian art. The show emulates the Spanish Riding School of Vienna, Austria, in its presentation of Lipizzans, and maintains a traditional as well as entertaining performance similar in many ways to what you would see at the Spanish Riding School of Vienna.

Also included in the performance is a segment called the “Airs Above the Ground.” These are the spectacular leaps and maneuvers, once used by riders in saddle to protect and defend themselves on the battlefield, which are now preserved as an equestrian work of art.

The Lipizzan is a rare and unique breed; its history and culture is known worldwide. The Walt Disney movie The Miracle of the White Stallions, depicting General George S. Patton saving them at the end of World War II from certain extinction, created an even greater world-wide interest in the Lipizzaner breed. Had it not been for Patton, there would be no Lipizzans today.