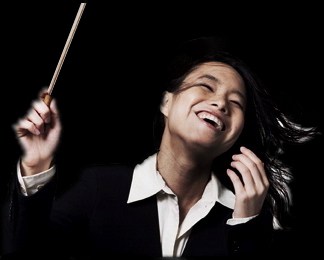 In their final presentation of the 2010-2011 Season Symphony Silicon Valley both enchanted and stimulated the audience in their presentation “Spices, Bandoneon & Italy” (June 4, 5) at the California Theatre in San Jose. As the show kicked off the introduction of the performance was interestingly coined “Possibly the most eclectic we have to put together” and I do have to agree that it was an interesting way to end the season and kickoff the summer thinking of the wonderful lands abroad.

Bringing a nice energy to this performance was the young and energetic Carolyn Kuan who has recently been the guest conductor for Symphonies throughout the US and also Symphonies around the world. It was fitting that someone with her energy would guide the audience through three very different performances throughout the evening.

The first presentation of the night was the “Suite Punta del Este” by Astor Piazzolla. Punta del Este is an upscale resort town in Uruguay which explains why the music made me think about relaxing in some remote destination sipping wine. Seth Asarnow from the Bay Area was the featured artist in this piece and he played an instrument many of us aren’t familiar with – the bandoneon. When I saw the program I first thought whatever is a bandoneon? Word doesn’t 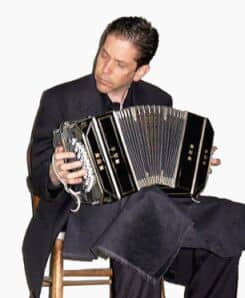 even have it in their spelling dictionary so off to the Wiki I went. It is an instrument similar to the accordion which was invented in Germany but has now become essential component of the music of Argentina and Uruguay. If you have ever heard the Tango before the bandoneon is the instrument that provides that familiar and addictive melody that makes Tango music so entrancing to many. Kuan conducted a small orchestra of only about 20 musicians which was well fitted since it didn’t overshadow the slower melody of the bandoneon. Of course our talented Symphony shines even with a smaller ensemble and the music was well performed. One of the highlights of the piece was a duet with Asarnow and Concertmaster Robin Mayforth on the violin that was both tranquil and moving.

After a few rounds of applause for the opening performance the front stage raised from the pit and the audience saw an amazing amount of percussion instruments come into view. The next presentation moved the percussion from the back of the orchestra to the front and center of the night as the Symphony presented Avner Dorman’s “Spices, 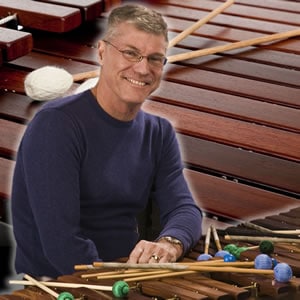 Perfumes and Toxins!” in all the energy almost approaching a rock concert at some points. The piece had a Middle Eastern and Indian flare to it and I felt like I was transported from the beaches of South America closer to the Mediterranean and the music had an almost mysterious and mesmerizing sound to it. Symphony Silicon Valley’s own Galen Lemmon led the percussion area teamed up with Steve Hearn, the assistant principal timpani/percussion from the Colorado Symphony Orchestra. Lemmon and Hearn were busy moving between 4 sets of xylophones, 2 sets of drums, and even sounding off a gong during the Perfumes movement. Kuan kept it all together coordinating the percussion and a full orchestra during moving parts such as in the Toxins movement where there was a nice interplay between the burst of energy from the percussion duo and the fine beauty of the strings. The crowd gave a standing ovation and there were many energetic conversations in the foyer during the intermission about how moved the audience was by the performance.

After the intermission Kuan guided the orchestra through a well done performance of Mendelssohn’s “Symphony No. 4 in A major, Italian” which transported the audience north to the cities of Venice, Florence and Rome which were some of the beautiful locations that inspired this well known piece which every patron recognized. One of the things that I love about classical music is that there are certain tunes that all adults know but sometimes we can’t identify them. If you don’t remember this one go to YouTube for a classical music refresher.

While this is only the second Symphony Silicon Valley performance I have gone to I was again impressed by how they mix interesting current or non-traditional works into the evening but don’t leave out the beautiful masterpieces we all continue to be moved by hundreds of years after their composition. Even though the official season wrapped up this weekend, the Symphony is performing five free performances as part of their “Summer Pops” program at the San Jose State University Mall this summer starting on July 30.

Also, only a few months away the 10th Anniversary season kicks off on October 1.