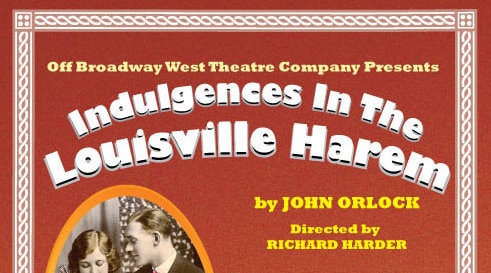 Off Broadway West Theatre Company, a non-profit company, announced that it will stage John Orlock’s Indulgences in the Louisville Harem. The theater is in the middle of its fifth season.

Two sisters, Florence and Viola, live in their childhood home, follow Presbyterian precepts of good works and prayer, and struggle against suffocation by the loneliness inherent in their spinster existence. Through the “winds of Kismet”, they send for an introduction to a selection listed in Mrs. Whiting’s New Book of Eligible Gentlemen. Fate brings not one but two men to their doorstep: Professor Amos N. Robbilet of the International Institute of Science & Populism, and his assistant, Winfield Davis.

Eight years previously, “the Professor rose to find that his voice, that had enthralled the crowned heads of Europe, had fled like a gypsy in the night…” Winfield now speaks for him, although the Professor still moves his lips and gestures with full expressive ability.

A bizarre courtship ensues and the sisters are thrilled that science and romance have each taken hold in their isolated lives. But Fate intervenes in this tender adventure to bring confusion, confessions, and tears in the night.

“…a whimsical blend of Chekhov and Mark Twain.”

Indulgences in the Louisville Harem was co-winner (along with The Gin Game) of the Actors Theater of Louisville’s Great American Play Contest, and had its Eastern European premiere at the Hungarian National Theatre.

Orlock is a recipient of writing fellowships from the Ohio Arts Council and the National Endowment for the Arts, as well as fellowships from the Minnesota State Arts Board, the National Endowment for the Humanities, the Blue Mountain Colony, and the Sewanee Writers Conference. The former head of the Theater Department at Case Western Reserve University, he continues to teach at CWRU, as a member of the Department of English, where he holds the Samuel B. and Virginia C. Knight Chair in Humanities. He currently conducts a popular SAGES seminar, Fly-Fishing: the Sport, the Metaphysics, and the Literature.

Indulgences in the Louisville Harem

Where: The Phoenix Theatre, Suite 601, 414 Mason Street (between Geary and Post), San Francisco