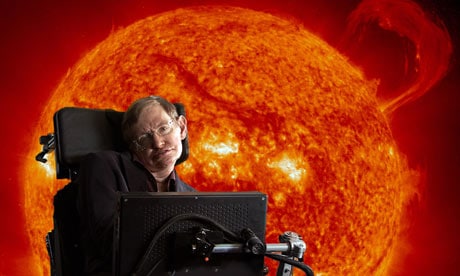 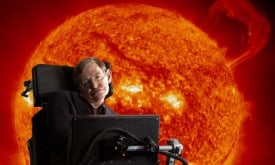 It’s no surprise really that Stephen Hawking says there’s no room for heaven in the cosmos. The way he said it, and the quotes that are surfacing across the web this morning are a wee bit amusing, however. The pithy-ness is courtesy of an interview the famed physicist did with the Guardian newspaper.

Now 69, Hawking said, “I regard the brain as a computer which will stop working when its components fail,” he added. “There is no heaven or afterlife for broken down computers; that is a fairy story for people afraid of the dark.”

Expect the controversy, especially here in the religious-centric U.S., to ramp-up in record time tonight on the boob tubes, and YouTubes. Calling the evangelical right…

This is not the first time that Hawking is likely to draw strong reaction, in all probability equal amounts awe and ire. In 2010, in The Grand Design he proclaims there is no need for a God to explain the universe. Deepak Chopra wrote on The Huffington Post, “The Grand Design is an intellectually delightful read with many insights, and yet it devastates hope.” The Washington Post, meantime, called the conclusions groundbreaking.

“The question is: is the way the universe began chosen by God for reasons we can’t understand, or was it determined by a law of science? I believe the second,” he said. “If you like, you can call the laws of science ‘God’, but it wouldn’t be a personal God that you could meet, and ask questions.”

Is life on earth then meaningless?

“We should seek the greatest value of our action,” he suggests.

Hawking has lived with with motor neurone disease for nearly five decades. In 2009, he faced a set back which saw him rushed to the hospital. But now he’s back at Cambridge.

Hawking is scheduled to talk today at the Google Zeitgeist conference in London and address the question “Why are we here?” Most expect him to explain it as simple random chance.