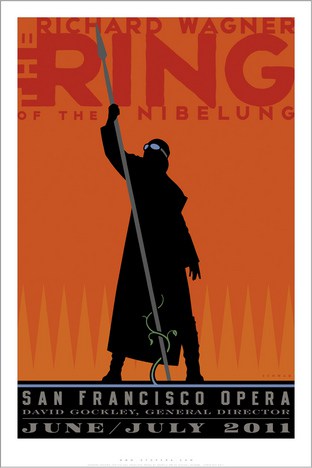 The artwork is available as a limited edition poster and will also be featured on the cover of the Company’s commemorative Ring cycle program book. The poster is printed on archival fine art paper and is available as an unsigned 16″x24″ poster ($75) and signed collector’s poster 24″x36″ ($150) through the San Francisco Opera Shop at the War Memorial Opera House (open during performances), and online beginning June 1.

Schwab’s work is easily recognized by his signature use of large, flat areas of color, dramatic perspectives and bold, graphic images of archetypal human forms. Often working from posed models, he typically designs spontaneously in front of the camera to achieve the lines and shadows he desires.

“My graphic heroes have always been the early 20th century poster artists from France, Italy and Germany. My goal was to combine the big, bold drama of those historic posters with a modern cutting edge attitude for this production,” said Schwab. “I’ve always enjoyed creating dramatic poster images that tell a story. Here, the growing vine at the foot of the spear held by Brünnhilde foreshadows a new life eventually emerging from the ever-flowing Rhine under the horrific, burning Valhalla above. For me, the paper is my stage, with shapes, colors and typography working together to create a scene or evoke a mood.”